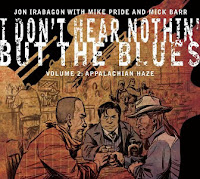 A few months back I wrote a review about Nate Wooley's album The Almond. It was interesting recording in which there was one note, and slight variations, stretched across 75 minutes. This one note was layered and changed slightly over time, but essentially it was one note.

This new album from Jon Irabagon, Mike Pride, and Mick Barr is exactly the opposite of one note, in fact, it's just about every single note in every single possibility combination possible between the saxophone, guitar and drums. However I feel a connection, something almost intangible that the two recordings share, something deeper than just the amount of notes. There is something aligned in how the modulations within a flow of sounds and thoughts draws you into their musical melee.

Suffice to say, there is a constant stream of sounds on Appalachian Haze. Mick Barr's guitar continuously agitates, it's pokey, it's scratchy, and it punctures through the blankets of sound that saxophonist Irabagon lays down. Pride's drums propel and accentuate energetically. But it's the guitar, a new voice in this group, that is like an axis for the others to dance, prowl and swing about.

Like Wooley's single note, I Don't Hear Nothing But the Blues' stream also achieves a certain meditative stance. The rhythmically oscillating and melodically adventurous traversing across the guitars sonic trajectory makes this avant-rock-metal-free-jazz excursion quite lulling. I don't think I've heard anything quite like it. At the same time, the strength of the album is also the one complaint I have: it's relentless. I am not sure if it's meant for that many repeat listenings. But really a minor quip, drop into as you like, be caught in its alluring riptide but swim out when you need.

If you can, find a copy of the recording, as the cover and inside art is as fun as the music is challenging and hypnotic. An illustration of the musician's as Wild West gunslingers duking it out in a saloon, it's full of humor and passion.