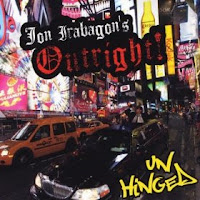 There is almost too much to write about here. From the over the top send-up cover to the smorgasborg of styles and sounds, saxophonist Jon Irabagon's group Outright! has unleashed a musical tour de force on Unhinged.

A follow up to 2008's eponymous Outright!, the only carryover is Irabagon himself. Replacing the large cast on that album is Jacob Sacks on piano, John Hebert on bass, Tom Rainey on drums, Ralph Alessi on trumpet and guest Glenn Alexander on guitar. All the players lend their hand (breath and imagination) in making this style jumping and heart pounding recording a dizzying delight.

The album kicks off with the first 'Camp Douglas' a quick palette cleanser - it starts off with some scrapes, groans and tones - and soon segues into the gnarly 'Charles Barkley', featuring knotted lines delivered by the sax and trumpet, underscored by the piano, building towards a driving middle section that features a brisk solo by Alessi. The Latin feel of 'Lola Pastille' is wonderfully seductive and is played pretty straight ahead, though tempos are stretched, rhythms become poly and the sax solo pushes the instrument to its tonal edge. Oh, and at the end there is almost a total breakdown. Another favorite of mine is 'Kreem2eek!', some of the tastiest fusion I've heard in a while. It chugs along at a good clip and splits off into searing guitar leads and frenetic sax lines.

The myriad styles and transitions, if not handled well, could end up as a sonic hodge podge. However, this is far from the case, there is a complex and cogent logic that makes it all flow from section to section. This is a well honed group, comfortable with the style shifts and layering of composition and free playing, and Irabagon's compositions really play well.

From a perfomance last year at The Stone in NYC: