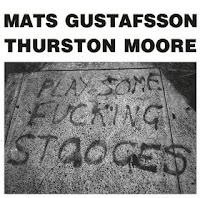 Once upon a time there was one of these hip clubs in Brooklyn. Some in-crowd people were lolling on expensive shabby lounge sofas, some of them were enjoying the retro ambience after a hard day in an advertising agency sipping at their over-priced beers. A local DJ played discreet house and ambient music so that the crowd was not disturbed talking about the latest artsy fartsy hype. At one end of the bar there were two guys who did not really fit in there, a tall, almost haggard 50-year-old wearing a lumberjack shirt which made him look as if he was in a Seattle grunge revival band, and a shorter, chunky Scandinavian in cowboy boots and rolled up jeans. They already had some beers and they were passionately discussing about the music which seemed to bore them to death until the Scandinavian had enough, he obviously needed some raw power: “Play some fucking Stooges!” he yelled at the DJ who gave him a frightened look because there was something in the voice of the man that made it clear that you should better not mess with him. While the DJ and the bartender did not know what to do the two men shoved the DJ away and unplugged his laptop before they entered a rough-and-ready stage. They were up for something. The Scandinavian stud was Mats Gustafsson, he grabbed a baritone sax and fumbled at a set of live electronics, his cohort Thurston Moore (of Sonic Youth fame) belted on an electric guitar.

All of a sudden hell breaks loose.

Gustafsson throws his baritone up in the air, he is growling, hurling agonized sax stirs at the people, he is moving to and fro like a sailor on deck of a schooner braving the elements, while Moore attacks his guitar with the palm of his hand. He throws sound splinters and feedbacks into the audience, waves of noise are coming down on them, a ruthless purgatory to cleanse them from their musical sins. It gets even worse when Gustafsson enters the electronics and Moore uses a steel bar as a bottleneck. “Where am I?” a young woman seems to ask, her face in sheer horror. She is in a thunderstorm of nails, shards, shredded metal and debris of biblical dimensions. The apocalypse ends after 22 minutes but you think it has lasted three days, an ad exec is going to the toilets and has a look in the mirror to check whether his hair has turned white.

The Scandinavian and the grunge rocker left the stage keeping straight faces, the DJ had left the place with wide opened eyes, obviously terrified. Rumour is spread that he was seen later wandering about aimlessly asking people for help because he claimed to know that the apocalypse was here. They turned away meeting him with disbelief. The bartender had tried to find shelter under his counter and when the two men asked for another beer he slipped away through a back door. Most people in the audience just stood there, tacked to the floor, puzzled, scared.

At the other end of the bar you could see four men – Stef Gijssels, Paul Acquaro, Paolo Casertano and Martin Schray – with eyes outshining Christmas tree candles, cheering Gustafsson and Moore with their beer bottles.

If you want to get an idea what kind of biblical storm you can expect, watch this:

“Play Some Fucking Stooges” is available as a single-sided LP in a limited edition of 450 copies. Again it is annoying for those who only have a CD player but believe me: it’s worth every cent. But don’t expect any Stooges songs!

I remember that night and I remember what happened just few minutes later. It is widely known as "The Glorious Freejazzsters Trills and Disorsion Riot".

Thanks Martin for being our historian!

After a second reading, I want to say something more that really emerges from Martin's review.
This music usually "scares" a great amount of people because more than other genres asks for a great effort of attention to be appreciated. It claims for the role of music as not mere background of our thoughts. You cannot escape, and once that the noise have been internalized, you can discover how many aural aspects we usually lose in the sonic confusion of our lives.

To be clear, the embedded video is not from the performance on the record you're writing about, right?

Dear Dan,
no, it is not the same performance but it is really close.

anybody knows if this is available digital?
thnx

DO NOT ORDER THIS RECORD! It's a rip off. You will never receive it and the label won't respond to e-mails and their web store is gone. BEWARE!! I even posted to Thurston Moore's Facebook but the comment got deleted which sort of intimates it may have been an illegal bootleg. CAVEAT EMPTOR!!!

UPDATE:I've spoken with Mats and Edward at Quasipop and it seems the issue is with Dumpster Diving Lab. They say he hasn't been returning their e-mails either so please don't order from him. Order directly via Quasipop.

hmmm... I got my copy in February I believe at least 3 to 4 months after ordering, from what i understand and heard there were pressing delays? I dunno this also is coming out of Russia, if that has anything or nothing to do with it.