Of basses, bows and other trifles: A brief journey through three solo releases

What follows are my considerations concerning the solo works on double bass by three young and interesting musicians. Despite some evident differences, the three releases are all really pleasurable and well conceived and worthy of an analytic listening to adequately ponder about the role of an instrument that, in this extended techniques new renaissance, is constantly gaining more weight. And this is well deserved considering its friendly bulk.

Sam Pettigrew - Domestic Smear (Avantwhatever, 2012)***1/2
(where our wooden friend is grated with love and learns to whisper) 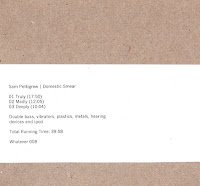 Sam Pettigrew’s Domestic Smear is the most experimental of the three and may be traced back to the conceptual art area. According to his website  (please take a look at his videos and the liner notes), this red bearded Aussie grizzly bear plays double bass often augmented with metal poles, vibrators, plastics, hearings devices and ipod and "uses the instrument as a theatre to question stereotypical roles, including the artist as performer, the listener as audience and identity as independent, gendered and individual". The work counts three episodes - Truly, Madly, Deeply - and shows in my opinion a brave approach to composition and an “ideological” vision concerning music that is not an end to itself. It would be easy to label the music here as a hypnotic and recursive droning, but there is something more. Below the rattling and the vibrations of sub-tones in Truly we discover alluded melodies, whispers and detailed noises, we find feeble openings coming out from the constant grating as in the middle of Madly, the drilling peal of Deeply and its ethereal bowed closing part. This is a thick album in the palpable meaning of the word, and if you are plucky enough to listen to it with a decent pair of headphones, you will maybe feel like pent-up in a pipeline, but you’ll discover as well how much this is a work to perceive with all the body more than just with your ears.

The couple of silent minutes at the end of each track, where little moves and excerpts of unknown songs float back to the surface, are needed to the listener to have a rest and face a new immersion.


Mike Majkowski - Tremolo (Avantwhatever, 2012) ****
(where our wooden friend trembles despite it being warmly hugged) 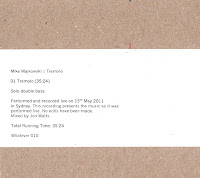 This is a remarkable album from another young Australian musician. Mike Majkowski is already credited of an other solo release called Ink on Paper on Creative Sources, and has recently delivered other two interesting works - in the Blip duo with Jim Denley on Bocian Records and on Bo’Weavil Recordings in the trio by the name of Roil. He’s involved as well in a considerable number of other interesting projects.

Relying upon his self-evident technical skills, Majkowski provides a work that has the merit to be both a document of an intense musical research and a highly enjoyable listening. The musician employs through the thirty-seven minute of the composition, which was recorded live and without any editing, the tremolo technique on each part of the instrument: strings, neck, frets and - I assume - the body itself. 'Tremolo was constructed over the course of about 4 months in 2011 […] and focuses on a number of sonic possibilities - both harmonic and textural - that may be extracted from the use of this technique and which serve as a point of departure for the piece itself' explains the author. It’s clear indeed that the conception of such a performance must be the sum of an advanced improvisation attitude and of a rigid work of composition. The most impressive quality of the album is the skill of Majkowski to play (and I refer the term both to the music and to the chance that he’s in that peculiar moment amusing himself) with the minor sonic results of his moves and actions on the instrument. This could be always true in a live execution, so I must explain it better. While he’s bowing on strings with changing intensity and speed to concoct the “main tremolo stream”, below this dominant presence emerge a thriving underworld of subtle whistles, chopped vibes, bits of notes and tones, echoed crackles, tiny scrapes with retracted nails (figure it out!). In my opinion, these fragments are the real compositional patterns of the piece and also the reason why you never feel hypnotized notwithstanding the monolithic structure of what you hear. The entry of the few really evident elements (the aseptic and repeated pizzicato note around minute fifteen, the acute bowed passage from minutes 23 to 27, the hammering immediately after that lasts for several following minutes) are then not perceived as novelties; they’re just the development of the hell of little things that is going on down there. It’s plenty of life just beneath the surface. Besides there is an undeniable fluctuation of dynamics from dead calm to really forceful.
I recently quoted Stefano Scodanibbio as a key figure during the last decades in double bass techniques and composition. It is just my opinion, but I bet he would have looked with favour to this work.

Eyes wide open on this guy.

I want to spend a couple of words of praise about this brave Australian label - Avantwhatever - that is promoting and publishing really interesting contemporary music by young and promising artists.

I’d propose upon trust a three stars global rating for the label and for all its releases, even for the ones I still have not listened. And if you’re looking for something beyond the double bass low tone, in the realm of sub-bass frequencies, I bet you may find some joy listening Matt Chaumont’s Linea, the very first release of the label. An exploration for curious ears!

Listen to the previews of both releases or buy the CDs in a nice eco-friendly packaging and at a reasonable price directly from the label.

Not one Nor by Daniel Barbiero could be described as the most classical among the three, but once again generalization is enemy of the truth. Released on zeroMOON this work incontrovertibly shows the chance of creating rich musical landscapes through the provident use of few elements. The solid heritage of the author about musical methods as counterpoint, atonality and modal composition, allows him to achieve a challenging output. From the label’s explanation: 'Not One Nor presents two works made of discrete events foregrounding the materiality of a large string instrument in its role as a resonating chamber. Both pieces are constructed out of a limited number of gestures and/or pitches and points on the instrument’s geography with the intention of producing an immersion in sound as material, interspersed with contrasting pauses'. Silence has clearly a palpable role for the musician and for the listener as well. The wait for the next event -as we learn from the parenthetically titled second chapter of this work - is an active ingredient in the building of the texture. Both on the acoustic instrument and on its prepared version, Barbiero has a thick, full-bodied tone. Something that reminds me of great hardanger fiddle players as Nils Økland. The slow and extended passages of the bow on the strings and a wise and growing use of the reverberation generate some striking sonic paths (some music has dimensionality - imagine to walk in the back of someone opening a trail for you in the bushes). What I admire the most in the two compositions is the talent to metamorphosize the nature of the double bass. You find here dings and scrapes as cymbals could emit, brushes and shuffles as generated by drums. Well, again this is true for many extended techniques solo releases, but this is not a mere exercise in style.

Another link to know something more about this musician.
Free digital download from the label.