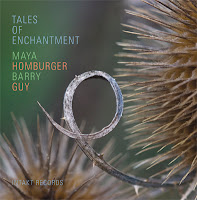 Often in improvised music, rawness and muddiness and even some roughness and extended techniques are essential to the music. Sounds have to collide in order to form something new. On the other end of the spectrum you have classical music, with its incredible attention to the purity and accuracy of the sound.

Nobody but British bassist Barry Guy has been able to combine both in his music. The technical precision of Barry Guy on his five-string double bass (possibly only equalled by Miroslav Vitous) and of his partner in life, baroque violinist Maya Homburger, enable to unify both ends of the spectrum like few others can.

They've played together on a variety of albums, some of which were reviewed earlier on this blog. Like on other albums (Aglais, Inachis, Dakryon, Star), the compositions are either classical or by Barry Guy himself, and by doing so offer an interesting image of pure music, in which genres are no longer of importance, making the overall emphasis on feeling and esthetic even stronger.

The album starts with "Veni Creator Spiritus", a 9th Century hymn, followed by Guy's eight part "Hommage to Max Bill", a Swiss artist and designer, then follow some Biber compositions, the Swiss composer and violinist whose work is among Homburger's favorites, and she has played his oeuvre on many occasions. The central piece is by the Hungarian contemporary composer György Kurtág, around which the album's structure is mirrored.

Guy's compositions add a strong contemporary feeling to the music, full of distress, suspense, danger and anger, aspects that are often lacking in classical music, and that complete the more detached abstract compositions by Biber.

Like with their previous albums, you wonder at the absolute beauty of the playing while at the same time you can be surprised by the boundary-breaking approach in Guy's compositions-improvisations, but also by his introduction of - somewhat iconoclastic - improvised moments in the classical pieces. I'm sure classical purists will call this a disgrace and jazz and modern music afficionados will call this approach conservative, but the truth is : this is a truly great and cohesive album, regardless.

Absolutely impressive and pretty unique. In my opinion one of the best albums of the year. And even if the duo has done this before, they've clearly outperformed themselves on "Tales Of Enchantment", and the title couldn't be more precise.


Watch them play Heinrich Ignaz Franz Biber's Rosenkranz Sonata on the video below. It is not from the album but it gives a good idea what the music is all about.