An attempt at a new format: bite-sized morsels of jazzified goodness. This weekend we’ve got dueling duos with Dominic Lash, a new look at the old with Aki Takase, and two unusual outings with Swedish legend Sven-Åke Johansson. 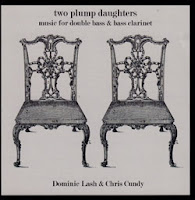 Clocking in at eighteen tracks, For Plump Daughters might have been a grueling marathon slog. Instead, it’s a continually engaging entwining of bass: double and clarinet. Lash and Cundy are able to find all the right ways to lock their instruments together. Both have great knowledge of various “extended” playing methods, but the result is never harshly abstract or unhinged. Just the opposite, really. It’s an elegant, emotive album that at times simply soars. The track title “Gravity Leaves” about sums it up. Pleasing, pleasing tones. 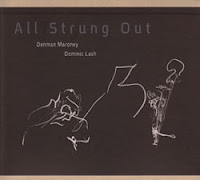 Bassist Dominic Lash spends about an hour trying to keep up with Maroney and his “hyperpiano.” The two establish an interesting dialogue throughout, though the album does drag a bit by the end. Maroney plies all manner of sounds out of the inside of his piano, muting and strumming strings, occasionally mustering orchestral sonorities that remind me of Romanian composer Horaţiu Rădulescu’s “Sound Icon,” a grand piano laid on its side and played with bows. Good stuff, if not quite as inspired as the duo with Chris Cundy. 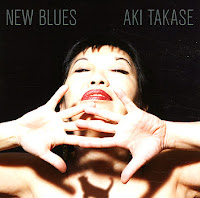 New Blues finds Takase and a cast of modern greats hammering through some old-time stride and swing tunes and a few Takase originals. It’s an eccentric album, but not always in a good way. It’s hard to jive the tumultuous, angular “New Blues” with the over-the-top vocal performance that follows on “The Joint is Jumpin’.” Don’t get me wrong—it’s a fun tune, as are the others Eugene Chadbourne lends vocals to, but they’re hammed-up in a way that borders on unwelcome comedy and can make for a disjointed, uneven listen. Still, totally worth a shot for originals like “So Long Knut” and “Late Spring,” which sets an e.e. cummings poem to delicate music. 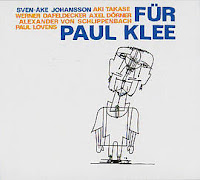 Mr. Johansson does dramatic readings of Paul Klee’s poetry, all while backed by a killer line-up that includes Aki Takase, Alexander von Schlippenbach, Axel Dörner, Paul Lovens, and Werner Dafeldecker. The music ranges from fairly abstract to quite lyrical, but comes across as nearly cinematic in scope. I can’t sit and listen without picturing choreography, theatre, a silent film—hell, even Klee’s own colorful geometries swirling and re-shuffling. As I’m not a German speaker, I have no idea if there’s any literary merit to Klee’s poetry. However, comprehension aside, there’s a great aesthetic pleasure in Johansson’s delivery. An album that’s both relaxing and stimulating.

Große Gartenbauausstellung, recorded with Axel Dörner and Andrea Neumann, is an album that often seems devoid of humanity. This isn’t a slight to the musicians, but rather a result of their concerted effort. A lot of it is just…hard to place. It shuffles along faintly, murkily, morphing through various patterns of quiet noise. Source instruments are often obscured, and the music is so focused on small, hushed details that the resonance of a crashing tom in “Hauptweg II” is genuinely startling, exciting even. These musicians have long been interested in poking around the underside of improvised music, and they come up with some powerful music in the process—if you’re willing to stop and listen closely.