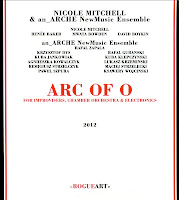 The first thing you hear as this disc begins is the dense sound of manic sawing and staccato notes jamming the circuits of your brain.  No lead-in.  No counting time to give you a second or two of anticipation.  Just BLAM! You're dropped into an environment of immediate suffocation & paranoia.  Then just as quickly as it assaulted you, the music drops and drones with a mournful tension that grows gradually until it reaches another climax of psychological drama.

The effect is jarring, compelling, and sets the tone for the rest of this extremely ambitious work, which was recorded live in front of an audience in Poland.  Mitchell augments a quartet for this composition with the Arche NewMusic Ensemble to great effect, often reminding me of those classic Alice Coltrane arrangements for Impulse.  And moving toward even further sonic possibilities, she is playing a sampler in addition to the flute.

Constant movement pervades throughout “Arc of O”.  Mitchell follows the introductory onslaught with a flute passage that is surrounded by the light fluttering of the collective in a way that invokes the Rite of Spring.  (Like the Rite, Mitchell's composition seems to be a musical representation of rebirth and the regeneration of all life-cycles.)  An exotic sounding melody follows, featuring David Boykin fighting with his saxophone, like he's struggling to get the thing out of his mouth while some unknown force keeps shoving it back in.  Drums pound relentlessly while a tea kettle threatens to boil over, warning of some sort of sacrifice.

The next section begins with a march tempo.  The seven dwarfs go to Hell as a melodic figure arises conjuring up a Braxtonian parade.  It takes a few more unusual turns until tension becomes almost constant.  Then out of nowhere, a surprise on par with the opening few minutes appears: a comic finish!  There is relief where none could be seen & it drops in as if from out of the sky.  Change as the only constant in the universe, Nicole Mitchell style.

To alleviate the heaviness of “Arc of O,” Mitchell has paired the composition with “Afrika Rising,” which seems light-hearted by comparison but is no less sophisticated in approach or scope.  It opens with the quartet playing vintage hard bop before the strings appear in the arrangement, again conjuring up those wonderful Alice Coltrane scores of yore. (I never understood the controversy over her string arrangements. They are majestic and beautiful).  This is followed by a kalimba inspired melody with a funk rhythm underneath, while Boykin and ARCHE's trumpeter, Kuba Jankowiak, duel over the top.
The next sections run the gamut between funk, Germanic big brass melodies, minimalism, and a couple of free blitz blowouts.  The last section is a work of total joy, beginning with Mitchell soloing over a kinetic and tense rhythm/riff.  As it opens up and the orchestra enters, Boykin solos in tribute to Alice's husband, leading the orchestra down the trail Trane once blazed in search of ultimate spiritual enlightenment.  A baritone sax solo from Mwata Bowden builds to screaming intensity.  The string section repeats the melody before Mitchell's flute appears, soloing to a gorgeous intensity.  (The map is good!)

A fantastic piano solo by ARCHE's Krzysztof Dys is so melodically well-constructed it sounds composed.  (All praise the map!)  The strings enter to play the main theme again and resolution is declared.  Put the CD on repeat to hear the cycle begin again.  Absolutely, positively wonderful.


You can buy it from instantjazz.com.