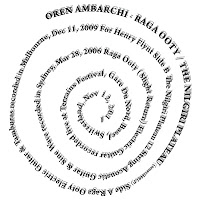 In the last six months or so Oren Ambarchi has turned up like a bad penny (will this idiomatic sentence work as I think?). I can count at least six major releases - and I think I’m missing some others - spanning from the psychedelic explorations due to his involvement as a guest in the spectacular super rock n’ jazz group Fire up to the avant-garde aspects to be found in the long collaboration with his plausible mentor Keith Rowe. Yeah, other musicians are actually that fertile, but Ambarchi is - in my opinion - succeeding where others have failed. The creation of a magnetic, unmistakable, powerful tone that is per se an absolute value for everything he creates and for each collaborator he teams up with.

Let’s be honest, this collage of live recordings from different venues can be hardly considered a masterpiece if compared with ground-breaking works as 'Stacte' or the recent live recording on the Polish Bocian Records - I will review it sooner or later - again with Rowe and the interesting (and new to me) Crys Cole. And I will keep on suggesting until the end of my days a meticulous listening of the interpretation that Ambarchi delivered - again with Rowe - of an excerpt coming from Cornelius Cardew’s opus magnus 'Treatise'. But still, what else could you possibly ask to such a kind of work?

During the first track 'Raga Ooty' an extended sitar - they say this is a tambura but honestly I can’t tell them apart - drone allows Ambarchi to build a recursive, almost invariable, distorted phrasing for almost eleven of the total sixteen minutes lasting the track. That’s a raga, you know! You can do this with a simple and cheap looper pedal, but it is obvious that he’s here doing it live and with no overdubs. He controls dynamics; he controls the shades of distortion; he gives texture and polysemic values to a row, repetitive and not even so original portion of sound.  He’s taming the growth of the composition and you can absolutely feel it.  Plots of Nilgiri Plateau and the closing reprise of Raga Ooty are not that different. On the second track Ambarchi takes advantage of the overtones given by the 12 strings acoustic guitar, while in the final track is again the control of this guitarist on the quality of distortion that impresses me the most.

A little story now. When I was more or less a teenager, I was used with a friend of mine to do this silly trick of imagining implausible collaborations between totally different 'artists' (e.g. Karl Heinz Stockhausen playing bass with the early ‘80s English punk group Subhumans or the unforgettable and misjudged blonde pianist Richard Clayderman touring in a duo with the legendary hardcore singer G.G. Allin - more often we used peculiar artistic figures from Italy that luckily no one knows here). Why am I telling this? Because I dream now of a future collaboration between Ryhanna and Ambarchi that will give to the ephemeral pop creature some kind of dignity. He’s the only man who can do that!
He’s the chosen one.

Finally, I’m sorry, but I have a duty to signal the unwatchable cover of this release.

The label provides previews and sells the digital release or the vinyl limited edition.