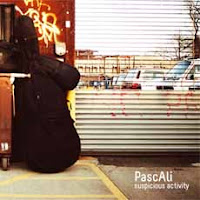 
What I appreciate the most about this record is the choice of the two artists to not go for long compositions, which is often a distinctive tendency of double bass players, both when they perform as a soloist and in 'mono-instrumental' combinations. One of the reasons might be, at least in my opinion, that the double bass can be considered as sonically less aggressive than other instruments from the string family and so needs a longer development and growth of its potentialities during a composition - e.g. Stefano Scodanibbio’s Voyage that never ends or take a look to this rich list.

PascAli, the duo named after and formed by the crasis of Pascal Niggenkemper and Sean Ali, offers to the listener as many as 22 brief images of their interaction, ranging from fifty seconds to less than four minutes. On one hand this could be a risk, since not being yet familiar with the style and the tone of these young musicians, as might be the case of a William Parker/Barry Guy collaboration, you - or at least I - don’t have the chance to say who is doing what in these short pieces. On the other hand, the sacrifice of their identities goes in favor of the cohesiveness of the whole. That’s why I feel like saying that PascAli is indeed a group more than a duo.

The second remarkable element is the use of prepared basses, augmented and altered - as the players explain - with kitchenware, aluminum cans, balloons, mallets, lampshades and almost any other kind of found object imaginable. Some of the experiments impress and stick in the mind more than others. In the attempt to describe what you can find on the album: Chinese mask, the second track, leans on an involving low-fi rhythmic pattern embellished by almost gipsy - despite the title - bowed strings. Just after, the low deep drone of Britpop is impressive. It's worth mentioning, for its title and for its noisy nature, the fifth How long does it take Styrofoam to become earth again?. Perpetua, the eighth track, displays a hypnotic pizzicato. The most valid aberration of the instruments natural sound is probably found on Kissing f-holes where strings become brasses - I’d say trumpets or saxophones but who really knows? – where tongues and breaths take the place of fingers and bows. Maybe a little more orthodox but I really like the twenty-first Japanese Garden and its dirty low chords and things. In short, you really can find any conceivable sound in this record: squeaking pulses, percussive strikes, metallic sounds, microtonal glissandi, trembling buzzes and wuthering winds. The two bassists must have been accurately torturing every single inch (or centimeter) of these poor and fatty instruments. No respect for strings, frets, bridge and the rest. Did they survive to the recording?

Ultimately, given that how you play is the consequence of what you think and say, I’d like to quote the short dialog found on Niggenkemper’s website. In some way it sounds as this music sounds.

Both artists have made available previews of the project on their personal websites. Buy from the label at a reasonable price.