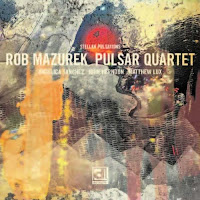 I have always imagined what it would be like to have an older sibling who had amassed a huge record collection from a past era. A dark room with vinyl everywhere just collecting dust waiting for a new generation of little fingers to delve in and spin them at random. There would be a magnetism and curiosity in finding a record like Rob Mazurek Pulsar Quartet's latest release 'Stellar Pulsations'. Even before playing track one, the album cover and track titles evoke a certain mystery. A subject matter rarely explored anymore but would fit in an older sibling's aural library. So I blow the imaginary dust off of this one and give it a listen.

'Primitive Jupiter' is the first stop for this intergalactic rocket ship manned by Mazurek (cornet), Angelica Sanchez (piano), Matthew Lux (bass guitar), and John Herndon (drums). They have all been deck hands or in the engine room on Mazurek's much larger ship 'Exploding Star Orchestra' so they are all well versed in navigating through meteors and space junk. This first track is very strong on melody which is pounded out by Sanchez as Mazurek dances around it as if he is defying his own gravity, which is fitting based on Jupiter's size.

'Spiritual Mars' is my favorite track on the album. It is in a perpetual state of introduction. In order to see how this works you need not to look any further than the engine room. Both Lux with his electric bass and Herndon are adding fuel to the engine at a monstrous rate propelling the ship into an eight and a half minute take off. Mazurek tries to calm them down but the power from the rhythm section is just too relentless to contain.

Unfortunately, the tracks 'Magic Saturn' and 'Spanish Venus', are not to my taste. They head in a direction of simple melodic balladry and rhythms. Strong statements, but not for me. It sounds like the group are waiting for Mazurek to save them from themselves. He tries calm and restrained and also tries Mazurek Runs the Voodoo Down.

'Twister Uranus' demonstrates what Sanchez can bring to the cockpit of the ship. The opening is beautifully played by her. Actually her magic touch can be heard all over the recording by filling in little holes left by the others or painting large pictures when enough space opens up.

So I put the album in a dark room in hopes that one day a child of mine or a distant relative pulls it out and gives it a spin. I would love to hear how the next generation of space dreamers would analyze it.

A clip of them can be viewed here:


I like everything that mazurek puts his hand (or trumpet) to but with this release I'm a little disappointed. I hear a muddy mix where Lux's bass takes up space that needs leaving. On Calma Gente and other recent releases by Chicago U duo Mazurek's strength has been in the writing as well as his playing. On this, i don't hear that ability to project memorable melody from out of a rhythmic core. It's all a bit too Miles Davis 2nd quintet for me and lacks the usual RM spark of originality. Don't get me wrong a less than stellar RM album is better than most people's best attempts. I'm hoping it'll grow on me

Magic Saturn is the most beautiful ballad I heard in a very, very long time. That track is simply perfection to me.

Really nice and competent review, Philip. But I must admit that I like Magic Saturn and Spanish Venus, and I like them exactly for their Miles Davis Quintet reminiscences. I think the whole album plays with tradition and progressive aspects, which makes it all the more interesting. And I like the perfection of it, even if the bass sound seems to be a bit odd. It all works out in the end.

The bass sound is not that odd considering related (post)rockacts like Tortoise.

Great album. One of the best in the Mazurek catalog I think.

"Magic Saturn" is one of the best tracks of the year, I'd say.

"Magic Saturn" is a very beautiful ballad. It did take a few listens for it to grow on me, but I agree that it is way better than most people's best attempts. Being a jazz improv amateur myself I can appreciate good attempts and I would still say this track is far beyond my reach. But who knows, I've been using an instructional video program by The Jazz Conception Company and I really think its worth it so far. Check it out yourself.