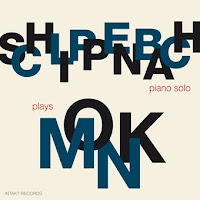 Pianist Alexander von Schlippenbach's Plays Monk begins with pianist's own tune 'Reverance'. The song fits wonderfully into the Thelonious Monk oeuvre in that it feels, well, reverent. But what does reverence with Monk mean? His playfully angular compositions are so open ended and modular and ripe for interpretation that it seems it would be irreverent to play them reverently. But Schlippenbach, who recorded the complete works of Monk a few years back with a quartet, is revisiting some of his favorite compositions on solo piano and working pretty closely within their original structures, revealing new depths to the tunes.

Schlippenbach's piano playing is just so spot on in these interpretations and every time I put this recording on I find myself lost in the lushness and expecting the unexpected chords. Schlippenbach toys with the time and tempos, and ties the songs together with short interludes that makes for an utterly enjoyable solo piano outing. I feel that the interpretations here bring out a more 'romantic' side of the songs, but still highlights the stride piano stylistics and flawlessly interpretes the melodies. His playing exudes a passion for the music and the thoughts that went to into creating their endlessly interesting  possibilities. Here though, the variation is found by digging deep into the original chords and melodies with such reverence that they are re-imagined just as they should be. 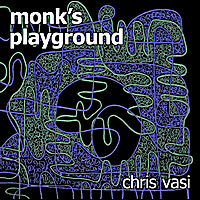 This was a lucky find on eMusic. In contrast to the more 'traditional' solo piano recording above, guitarist Chris Vasi takes a stab at reworking both the well known and more obscure songs from the Monk songbook and renders them with a somewhat modern jazz feel.  Joined by saxophonists Lou Hoff and Jonathan Gibson, drummer Forrest Young, and bassist Jonathan Wheelock, this is an overall enjoyable collection.

Vasi's approach on guitar is that he uses an unadorned tone and organic approach that really fits the music quite well. From the opening 'Let's Cool One', his arrangements stay true to the original melodies but the feel is updated by mixing in some unexpected elements. As the notes on CDBaby say, Vasi "re-imagines the music of Thelonious Monk, using elements of jazz, funk, odd-meter, New Orleans, Eastern, and flamenco."

A surprise for me was the delicate arrangement of 'Kojo No Tsuki (the Moon Over the Ruined Castle)', a song that Monk recorded under the title 'Japanese Folk Song.' I was unfamiliar with it but really enjoyed the contrasts between the sax and guitar in rendering it delicately but still with a bite. In fact, that may be a good way to describe these arrangements, as generally a mix of subtle shadings and a good deal of energy, taking on the mostly well known tunes in an enjoyable and playful manner.

This is a really beautiful and profound review of Schlippenbach's Monk album, Paul. He has been working off Monk through his whole career, he is his main influence. There have been Monk covers in almost all his collaborations, from Globe Unity to Monk's Casino and even his trio with Evan Parker and Paul Lovens. I really enjoy this album.