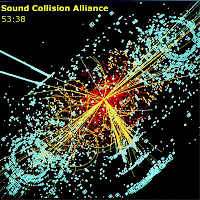 In my opinion you must be quite brave to run a non-profit free jazz oriented netlabel for almost five year. Pan y Rosas Discos from Chicago (come on Martin!) has actually done that counting more than sixty releases on its side. I recently reviewed Julia A. Miller solo guitar effort and I’m now listening to this curious experiment entitled Sound Collision Alliance. The name doesn’t match completely with the result. There are some interesting crescendi with a valid deployment of noises, but generally I consider this as mainly ambient release.

Darren Bartolo, that probably cannot rely upon strictly Mandarin roots, plays the traditional Chinese zither gu zheng (http://en.wikipedia.org/wiki/Guzheng) and is joined by Sam Krahn on electric guitar and Sarah Ritch on electric guitar (another one, not the same), cello and laptop.

Obviously the recognizable presence of this unusual instrument (the zither or the laptop?) gives to the general cohesiveness of the sound a folkish taste. I kind of like the obsessive recursion of the first track and its development in a quiet dialogue between the strings. Structure of the second track is more adventurous. The cello, bowed and pizzicato, and some background accompaniment on a distorted electric guitar, plus an ethereal and perpetual synth note to amalgamate the whole, give to the composition an hypnotic pleasantness that bring us to a noisy closing. Structures of tracks three and four are similar. This is probably the most evident lack of this work. Sounds are well-chosen and I especially appreciate the amount of distortion assigned to one of the guitars. It’s really remarkable that this is the output of a six-hour session and I believe the three musicians are on the good way to develop a compelling interplay. It’s worth the listening.

A curiosity. I assume the title of the album is the total running time of the release. By the way my audio player says the four tracks last exactly 54.18. It never ever lies.