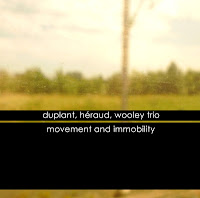 Movement and Immobility is a forced confrontation with sound. Though I’m not sure I can get fully behind the “total” acousmatic immersion that folks like Pierre Schaeffer and Francisco Lopez advocate, there are definitely times when yielding to sound in-and-of itself is a freeing, rewarding exercise. And sometimes, you don’t have much of a choice.

Much about Movement and Immobility is obscure: just what exactly Bruno Duplant’s “electroacoustic device” is, how much of the music is improvised, what has been processed in the studio after the fact, hell, even whether all of the musicians were ever in the same room to create it. I struggled with this when it came time to sit down and write. I debated sending emails, hunting down musicians, asking questions. Instead I listened to Movement and Immobility one more time. I listened, and I realized: it doesn’t matter. This is an album that’s less about human gestures and motivations and struggles than it is about pure sound. Sound as a complete environment, a complete experience.

In three long pieces, ideas are slowly repeated, revised, subtly reconstructed, bringing to mind the stoic focus of the minimalist composers and the aural depth sought in many works of ambient music. Héraud’s saxophone is the most easily identified element, though the long notes exist more as timbral coloring than anything else. “Continental Drift” hums and rumbles like the automated systems clicking on and off in the engine room of some spacecraft. Events start and stop on esoteric time tables, layers of ringing feedback multiplying and dropping away. Electronics and trumpet amplification seem to be a part of the process, but never in an obvious or straight-forward way. Occasionally, scrapes of percussion can be picked up, or the crackle of radio static seeping through the din of “Climate Disruption.”

In all, this is an interesting, immersive offering from musicians who frequently conjure up novel sounds. Somehow, Movement and Immobility sounds altogether different from all that they’ve shown us before. So strap on some headphones. Maybe even a blindfold, like a hardcore Schaefferian disciple.  I suspect they’ll surprise you again.

Dan, that's exactly the way I've been listening to it.
And I guess this is why I hear what you say about this work.
In my case I had even this pair of handcuffs...but that was eehm...
I admit that this "electroacustic device" is a little bit too obscure, but the result is, in my opinion, a pleasurable listening.
Thanks for your profound review.