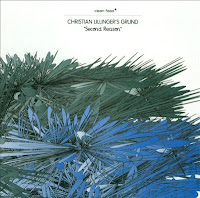 In my real life I am a high school teacher. I like my job and I like teaching kids. However, especially some of the boys cannot sit still, they rock with their chairs, they drum on their desks with their fingers, they fumble through their hair. I guess Christian Lillinger was just like them, he even called his first group Hyperactive Kid. With his rock’n’roll quiff Lillinger, who is only 28 years old, looks like a mixture of Minutemen’s George Hurley and Paul Lovens on speed, and he also plays like that when he is mauling his drums, jumping up and down behind his kit, using all kinds of materials like steel springs, megaphones, or plastic bottles. He is constantly in motion, his drumming is a highly explosive mixture of sound explorations and power play.

Grund is the German word for “reason” but also for “ground”, “cause” or “base”. In an interview with a German newspaper Lillinger said that for him Grund means the ground where he came from, the two basses (Robert Landfermann and Jonas Westergaard) were his platform. They build the base on which Christopher Dell (vibes), Achim Kaufmann (piano), Tobias Delius and Pierre Borel (saxes) can soar. Grund (the band) is like a meta-instrument, an organism from which each instrument can crystallize slowly and individually before it is absorbed in a tight rhythmic network again. Lillinger calls this “interconnection”.

You can see what he means in a shorter piece like “acht!” which starts with a piano/bass/vibes unison part before Lillinger joins in. Far in the distance you can hear a saxophone squealing before the track tilts and drums and sax entwine in an interesting dialogue until the sax vanishes in the group context again. “Schnecke” (which is the German word for “snail” or “slug”) is a similar track, rumbling and rocking, you can find weird circus elements, breakbeats and strange saxophone shrieks. Kaufmann and Lillinger drive the band in front of them. Very often this music transgresses the borders of “jazz”. It is close to new music, the band creates sonic arches which seem to come from a soundtrack for an expressionist film of the 1930s (as in “Grund VII”). On the other hand there are free jazz elements, although not in a traditional way because a lot of the music is composed.

Lillinger says he has ideas he wants to file out. He likes rehearsing, he likes working with his band on these ideas, he wants to be completely free. This is what improvisation means to him in the end – it has to flow.

I could never really get into Hyperactive Kid due to the lack off depth. Everything was on a completely superficial level: excellent players, great technique, but no form. This meant that every track on the album was 'theoretically' the same, in fact it could for all purposes have been the same 'one long' track.

I'm going to give this one a listen to see if they've (he) developed, or if it's just the same again.

I have First Reason and and I'm just listening to "Second Reason". They are completely different in style, but both strikingly absorbing, joyful, astonishing. So elaborated in technique and composition - wow.

@joesh: I love Hyperactive Kid and highly recommend you give the album a second try. But live is still much better - saw and heard them last year in Zurich. :-))

Thanks for the tip I will indeed check it out. In fact I have two of their records already.

I also find bands better live than on record. The BBC went on and on about the 4th record (I think) which is where I came across them.

Very interesting and creative music. It deserves more than 3½ stars

The first 5 tracks are really great. But i dont Like the last 3.
This is still A great record - cant wait for A new record from This group.