A couple of months ago, I planned to make a review of the various reeds-bass duets that were produced this year, with Pedro Sousa & Harnano Faustino's "Falaise" (already reviewed) and with Sean Conly & Michael Attias "Think Shadow" (still to come). So I waited for more, and possibly this is it, just a handful of albums with a line-up that I really like. If you like the format, as I do, the following albums are not to be missed. 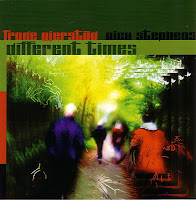 The great thing about duos is the intimacy of the interaction, two musicians focused on each other's movements, thoughts and concepts, catching and anticipating, just to integrate, develop and then amplify. One of the critical elements is the sound quality : it is chamber music in a way and as a listener you should get the feeling that the musicians are playing in your living room.

Which is certainly the case here. What they don't do, is playing wall-paper music, or offering you the warm comfort of a burning hearth fire. They do the opposite. They are in your living room, and they offer you some burning fire, yet it's not of the comfort-offering kind.

Gjerstad's clarinet phrases are mostly short, almost like dots on a canvas, or like bird calls, full of abstract frenzy and wild commotion, yet combining this with the natural lyricism we know him from.

Nick Stephens' bass sound as it should sound, deep, warm, with every string plucked releasing notes that are  enveloped in a woolen warmth. The calm delivery, the love of timbre and single notes, the cautious touching of sounds, it is all here, as you hope to expect from a duo performance. Stephens picks up his bow at various moments, but the magic comes with the last track, when suddenly notes are lengthened, both on bass and on clarinet. 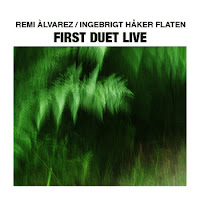 The approach of the Mexican tenor saxophonist and the Norwegian bass-player is different. First, the sound quality is not optimal, with both instruments being recorded from a distance. In contrast to Gjerstad's pointillism, Àlvarez is a lyrical player, stretching and lengthening his phrases, while at the same time not afraid to go into violent outbursts of strong expressivity. The pieces are lengthy, offering both players the time to develop and expand. Álvarez is a real emotional and soulful player, offering his heart on a plate for everybody to see and hear, despite the abstract level of the improvisations. Håker Flaten is his usual good self, used as he is to play in this kind of limited setting, as he did before with artists such as Joe McPhee, Evan Parker, Håkon Kornstadt. Håker Flaten also played with Frode Gjerstad on numerous occasions and is part of his Circulacione Totale Orchestra.

The interaction is good, so is the performance and the live aspect of the recording too, but the sound quality could have been better.