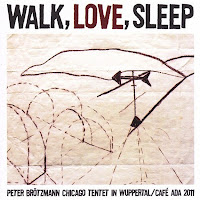 I was early on March, 22nd, 2012. I wanted to have a good seat, like the one I had the day before. I put my jacket on a chair in the first row and went outside to have a drink. The weather was really nice, the days were getting longer and the people were enjoying springtime. The musicians were having fun as well, they seemed to be really relaxed, they were hanging around in a separate but visible open air backstage area, talking. Peter Brötzmann was smoking one of his small cigars, Johannes Bauer was enjoying a cigarette. Kent Kessler and Michael Zerang were laughing, Fred Lonberg-Holm was having a beer. Some aficionados were talking shop, Mats Gustafsson was selling rare vinyl to a dealer from Belgium. Everything was almost too flawless for this extraordinary event when Wuppertal was celebrating the 70th birthday of one of the city’s most famous sons with a three day concert at Café Ada. The stage was on the second floor of the café, usually used as some kind of dance hall, you could really imagine tango dancers floating over a patina soaked wooden floor. As a location for a free jazz concert it seemed somehow strange but it turned out to be perfect. These three days were something special – you could feel it, see it, hear it, you could even smell it. Everybody came to celebrate Peter Brötzmann. There were people from Russia, from Scandinavia, from the Benelux states, from all over Germany. Jost Gebers, Brötzmann’s long time FMP companion, came to record some sessions, film teams were there for documentaries and there was an exhibition of Brötzmann’s paintings and woodcarvings in a local gallery. I know it sounds like a cliché, but it was like a big family.

And Brötzmann wanted to pop the corks with his Chicago Tentet + 1, the greatest, awe-inspiring, mind-blowing, ass-kicking large ensemble in free jazz, at the moment consisting of Brötzmann, Ken Vandermark, and Mats Gustafsson on saxes, Johannes Bauer and Jeb Bishop on trombones, Fred Lonberg-Holm on cello, Kent Kessler on bass, Per-Åke Holmlander on tuba, Michael Zerang and Paal Nilssen-Love on drums and Joe McPhee on pocket trumpet and sax. If they are in top form they can do things you will never forget. The second day at Café Ada was such an event, Brötzmann decided to give the audience the full monty, two sets of the complete orchestra.

However, if you see the Chicago Tentet, you hardly see them play tutti. It is rather a combination of different combos being rearranged constantly, as if the Jimi Hendrix Experience, Cream and Led Zeppelin were simultaneously on stage.  The first of the three untitled tracks starts with Sonoré (which is Brötzmann, Vandermark, Gustafsson) before they are all of a sudden displaced by a quintet of Zerang, Nilssen-Love, Lonberg-Holm, Holmlander and McPhee  – it is like listening to the start of a landslide. This quintet is joined by Bauer and Brötzmann, later by Bishop and Gustafsson. This was the strategy the band followed that evening: starting with solos, duos, or trios, accelerating by adding more instruments, then reducing again – in absolute perfection, as if there were no transitions. Jonah must have felt like that when he was inside the whale, it is like watching a huge organism, with the rhythm section as the heart, incredibly strong, pumping, keeping the whole animal going, the other instruments as the organs working together in absolute harmony.

As to the music there were several magical moments. You could see that in Johannes Bauer’s face. When he was not playing, he was looking to his left and to his right, laughing, swinging, shaking his head in disbelief, smiling in admiration, being not only a member of the band but also a spectator who has the best place in the audience. When he joined in, his head had the colour of a red balloon. The final act of the first part of the evening was pure rapture. It started when Bauer, Bishop, Brötzmann,  Lonberg-Holm and Gustafsson ended their quintet with a heavy metal break and Lonberg-Holm started anew. One after the other Nilssen-Love, Gustafsson, Zerang, Vandermark, Kessler, Holmlander and Brötzmann (on tarogato) joined in. Then the brew was reduced to Sonoré and the drummers, Lonberg-Holm on electronics drops in, then the bass and the tuba, finally the trombones and the trumpet. Only here the whole band is in action but it is not loud and iconoclastic as you would expect, it is intimate, even mournful and tender.

The second set starts completely different. This actually is the perfect thunderstorm, fifteen minutes of sheer power and brute force on the one hand, pure vitality and joy on the other – all of it meandering from larger formations to smaller ones again. When Zerang and Nilssen-Love – the heart of the whale - start with a hellride duo on the drums and almost the whole group joins in this is one of the greatest moments of the album. After 15 minutes the group splits up to quintets and sextets and trios, Peter Brötzmann mostly watching from the side, some strange god contemplating what he has created. The first part of the set ends after 23 minutes (the tracks on the second CD have a strange arrangement which does not fit with the actual one that evening). The third piece of the evening was dominated by the brass section, Sonoré, Mc Phee and the trombone choir supported by a highly sensitive Nilssen-Love and a empathetic Lonberg-Holm on electronics – to die for.


After another infernal 14-minute-track and a short encore the crowd left Café Ada, you could see that they just had a divine experience. Outside I sat down on a bench, taking a breath, I looked up, between some clouds a clear spring sky opened up. Most of the people were to come back the next and final day.

You can watch the concert here:

But buy the album, really, the sound blows you away.

What was the most unbelievable thing about this event? Believe it or not: the third day was even better. Just watch the last ten minutes.

Thanks a lot Martin for this review!
Now, on one hand I will regret forever not having been there for all the three nights, on the other - through your precious description - I'll have the chance to imagine myself on the chair next to yours enraptured by this gentle and sentient maelström...

Great review Martin! Like this album that I've been listening again and again with great enthusiasm.
I had the opportunity to buy the album to Paal Nilsen Love, at the and of a another great concert of Atomic, two weeks ago.
Bring harsh winds... the Chicago Tentet is ended. Sad news, indeed, it is, but when i read the letter from Brotzie to Wire, i understand this great and unic Artist:

“14 years… The Chicago Tentet
That's a long time for a 10/11 piece band. Time to say goodbye? Time to stop? For sure time to think about the future!
There are a couple of reasons why I decided to stop it, at least for the moment. The first one is the everlasting critical economic situation, actually with no expectation for better times – we Germans and Americans can't count on support from our cultural departments.
The second, much more important, is the music. Hanging together for such a long time – with just a couple of small changes – automatically brings a lot of routine. In general nothing against, you need it sometimes to survive, but if it gets so far that one can't exist without the other – music is over.
In 2011 with the weekends in London and Wuppertal we have reached the peak of what is possible in improvisation and communication with an immense input from all of us. For my taste it is better to stop on the peak and look around than gliding down in the mediocre fields of 'nothing more to say' bands.
I love to work with larger ensembles and I won't say, 'That's it,' but I need a bit of time to think about some changes, the financial situation is important and in a way the financial situation forms and builds sometimes the music. Who can afford to travel with a quintet nowadays, you see what I mean?
I think the next fall will answer the question about the future of a NEW tentet.

Indeed this is sad news, Miguel.
When I talked to Brötzmann at the Mulhouse festival this year, he said that he always asks the Tentet if they want to go on because the cultural and financial situation has become more and more strenuous. Brötzmann sounded really frustrated when he was talking about tour situations - especially for larger ensembles. The financial crisis in Europe has led to enormous cut-backs especially in the field of culture. On the other hand he has always been radical - being a typical member of the 1968 generation - and has stopped things out of the blue when something seems to have become predictable to him. I am looking forward to a new large ensemble - even if it is not such a marvelous supergroup again. And I am grateful for all the beautiful moments this group has given me.

Conductor with licence to play
Peter His Majesty Brötzmann