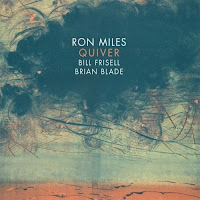 Strangely enough trumpeter Ron Miles and guitarist Bill Frisell somehow fit nicely into the same category of musicians, and the fact that they have found each other is not a surprise. Both have a technical proficiency that many (most?) professional musicians envy, they share the same leaning for sentimentality coupled with a deep feeling of American musical roots and especially the blues. On top of all that, both are equally creative enough to transform tradition into modern form. Not free form, but one that is inventive and compelling.

The third voice on the trio is Brian Blade, a drummer of the same technical skills as his band-mates, and who miraculously adds the same feeling to the music as the other two artists.

If some of Ron Miles' previous albums were too mainstream to my taste, they still could be appreciated for the quality of the music and of the playing. His duo album with Frisell - Heaven - was also excellent, but too mellow at times for me to bear. Blade's contribution pushes the entire process into a more dynamic format.

Because of this, "Quiver", is now uplifted in an incredibly joyful and playful album with references to the entire blues and jazz history, starting with Jelly Roll Morton and ending with Ornette Coleman. As Miles says in an interview :  “And as much as anything, after a lifetime’s study, what this music has given me is a sense of the enormity of spirituality; of being American, of being African-American; of how privileged I am to walk that path and how much work I still have to do. There are so many people who’ve inhabited this music: living it, writing it, playing it, listening to it. So you just find a way to be you in it, to find your way in it. That’s what we’re trying to do on Quiver.”

He's too humble in fact. Three tracks come from the great jazz tradition, with tunes as wide apart as "There Ain't No Sweet Man That's Worth the Salt of My Tears" by Fred Fisher, "Doin' The Voom Voom" by Duke Ellington, and "Days Of Wine And Roses" by Henry Mancini.

The six other tracks were penned by Miles, and they capture the same feeling even more : a sensitive and inventive evocation of deep roots, full of dust and wide landscapes, yet intimate and human, friendly and easily switching from sadness to joy, two basic feelings that lie at the basis of most music, and that are also reflected in the form that is rock solid in the themes and harmonies, yet as free as it gets in the improvisations.    It's at times amazing to hear how the trio changes the piece completely upside down and shows all various aspects and possible modes of playing in a row, as if it's the easiest thing in the world, and all that while improvising and enjoying themselves. It all feels so relaxed and playful that it's hard to believe that three musicians are thinking and listening with extreme focus and concentration. Don't expect any of the fashional feelings of anger or distress or violence or even surpise and wonder. This is pure jazz, in one of its finest dresses.

And the overall result is stellar. Ear candy from beginning to end.