Brian Labycz, a Chicago-based improviser mainly performing on electronics, is the name behind the constant growth of Peira, the brilliant label that has - especially in the last months - released  a consistent number of interesting works in the field of improvised music. The minimal layout of the label’s website, the sober and basic covers of the releases (just surnames, not even names for the artists), together with a fair pricing policy for the CD-r limited editions, illustrate the label’s clear intention to stay focused just on the essentials.

The improvised and experimental music comes mainly from young musicians. Few words and many facts!

With an actual catalogue of fifteen titles, Peira may already count on the repeated presence of important and widely known musicians such as the great cellist Fred Lonberg-Holm, the many-sided trumpeter Nate Wooley - who proabaly released his most daring and conceptual solo work '[8] Syllables’ on the label (and one of my favorites), the noteworthy double bassist Jason Roebke and the innovative bassoonist Katherine Young. As well as on the recurring involvement of the founder himself in many of these projects. We take here the chance to spend a few words about some of its latest releases. In reverse chronological order. 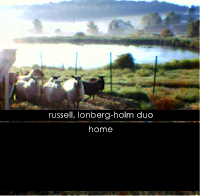 Fred Lonberg-Holm is a great cellist. John Russell a great guitarist. Their interplay is convincing and makes this is a good album. My ambition is to reach one day this level of pithy reviewing.  By now I’m still lost in my tender wordiness.

The two musicians show a perfect control over the variance of dynamics that such a long improvising dialogue asks to keep the listener’s attention alive (whoever has survived to this knows it pretty well). The opening and almost 28-minutes long 'Emsket' is a perpetual rollercoaster of pianissimo and ostinato. Sometimes the pizzicato is so dense and minimal that you lose the perception of the role of the two instruments. Russell often plays on harmonics, while the distinguishing sharp bowing of Lonberg-Holm invites and challenges the guitarist’s arpeggios to grow in volume and weight in the developing composition. The capacity to dialogue at each level and on every sonic field explodes in the central part of 'Moorit' where the two masters face each other mainly through the scrapes and the thumping of Lonberg-Holm and the metal slides and the dry chording of Russell. I really like the sort of modern manouche interaction they set in the first half of 'Mioget'. Who snores and then coughs from 11m20s to 11m30s? Is it intentional? 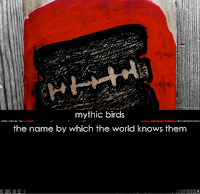 Mythic birds have a peculiar line-up. A bass clarinet trio - Jason Stein, Jeff Kimmel and Keefe Jackson, with the latter sometimes also on contrabass clarinet - enhanced by the modular synth of the label’s founder Brian Labycz. I’ll be honest. I’ve never established a good relationship with the clarinet - especially with the members of the family starting from alto going up (and luckily here we have just the 'low' part of the family represented). I guess this is due to its hybrid acoustic nature, not really a saxophone nor a trumpet. Obviously this is just a limit of my musical comprehension. I was then a bit scared at first. And I was wrong.

For sure on this album these instruments are not used in a conventional way. They basically build a very motley trestle where the synth of Labycz slots in. Sometimes the brass section goes for really syncopated rhythms using slap tonguing, fingering on the buttons and far inkling of suffocated notes as in 'Forbidden Generosity', in other moments  - as in the first half of 'Let go of the long tone' - the intertwining of melodic phrasings bring us to really open and enjoyable jazzy (I’m short of other adjectives) musical landscapes. In both cases the constant and sophisticated texture added by Labycz’s synth is really rich and powerful, although never overwhelming.  In the longest 'Dissimulation' the two aspects cohabitate, and especially in the second half of the track the consistency of the synth emerges in all its variety.

It’s now several months that I write on these pages and it’s not a mystery anymore that I’m pretty fond of all these little bothering noises as beeps, whistles, buzzes, vibes, thumps, scratches, AM interferences, chirps, scrapes, hiccups and probably little farts (let’s admit it!). Labycz has a great control over the choices and the presence of these inlays in the development of each composition. This is a great quality.

Maybe I should change my minds about clarinets. Maybe just a little bit. 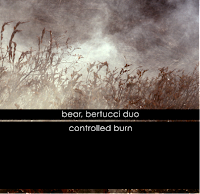 Ed Bear is on baritone sax and Lea Bertucci on bass clarinet. Their compelling blend is frequently enriched by vibraphone and AM radio textures. I don’t know much about the two musicians but they have clearly developed a solid interplay from the former experience in the duo by the name of TwistyCat, credited of several releases since 2008. Extended techniques, although present, are never overused.

A good example is provided by the second track 'Scelsi Girl' - that I assume is named after the great composer Giacinto Scelti. The two instruments face each other with long growing notes, sounding as guitar feedbacks or analogic synths, up to a meeting point where they reconnect. Likewise in the third track 'Tooth', while the sax is building the main melody through trills and trembling layers, the clarinet is far playing on very long notes. Then they suddenly and surprisingly join to offer inlays of melodic phrasings in the final part.

Controlled Burn is the right title for the album. There’s often the feeling that the cutting landscapes slowly built by the two instruments are going to explode, but then as the tension inflates the players progressively subtract elements from their construction. The sound is thick and pauses and silences are relevant parts of the structure. The musicians perfectly alternate with each other working on microtonalities and providing from time to time melodies or background noises to the composition . The album has the great value to be really accessible and pleasurable. And even the nice traditional arrangement of the short track called 'Fanfare' finds its place. 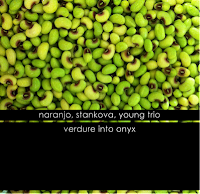 In this experimental trio Ivan Naranjo is credited with electronics, Maria Stankova with voice and electronics and Katherine Young with bassoon and electronics. The original bassoonist has been already and repeatedly reviewed here on the blog.

The quality of the sound is excellent but the work is marked - in my opinion - by an underlying sketchiness. This is particularly evident in a long composition as 'Septiembre cinco', where Stankova with her voice and Young on the bassoon give life to some interesting passages, strengthening and altering their respective tones with the help of electronics, while Naranjo provides the noisy background. The amalgam of directions and musical visions you should expect from the development of the piece seems never to take place in a cohesive way.  I could not find more information about the genesis of such a project, but my belief is intensified by a careful listening of the three tracks equally named 'Reconstruction' in which each musician performs in a short solo set. All three of them are pleasurable and in some way more coherent than the trio tracks. Maybe for once the whole is less than the sum of its parts. 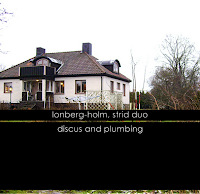 This meeting between Fred Lonberg-Holm (cello) and Raymond Strid (drums) on the label Peira conjures up an image of two kids playing with a box of elastics. They occasionally snap there own and each others fingers by accident but mostly they just admire the friction, resistance and stretch that can be produced by a rubber band.

They revel in the sounds of things about to break, not the volume of the structural failure itself. Lonberg-Holm pushes the cello to its straining point but not it's breaking point. He pulls it back before then. Even on 'Oerter', we get a little taste of his classical side.

Strid runs the gamut from crisp bells and cymbals to tick tocks of old clocks right down to the sub bass effect on his kick drum that just fills your head with sound.

Together they flirt with not only classical but they also share some heavier moments (when they cook, they really cook) as well as some haunting cinematic soundscapes. They do this while always sounding together and always pushing the elastic band to its limit.

I like our idea about the weekly roundups. Thanks to Philip, Dan and Paolo for doing them so far.
I have a question to Philip: I found it really strange that all the titles on the Lonberg-Holm/Strid album are named after discus throwers. Do you have any idea why? The house on the cover looks totally German, by the way.
Paolo, you poor man! You don't really like the clarinet and then you listened to two clarinet album and one with a bassoonist. That was hard. But give the clarinet a chance, it's a beautiful instrument. Or will there be finally something we disagree with each other? I really like Mythic Birds.

Great review as usual. Thanks Paolo. We will do more of these weekend round-ups. The frustration (scandal?) of this blog is the number of albums that remain without review!
Thanks
stef

Hey Martin, thanks for the question. I, if I may, would analyze it this way. I can see a parallel here with the discus throwers and the evolution of free music. Lonberg-Holm and Strid, metaphorically, are taking the music, spinning it and tossing it into the air and waiting for it to land. As for the names themselves, the athletes in the titles of the album are in order of the evolution of the world record. Silvester (tk1) held the record in 1961. Oerter (tk2) held it in 1962 and so forth until the final track Schult who I believe is the current holder who set the mark in 1986. As for the plumbers, I have a theory there as well, but I'll leave that up to the collective imagination. Philip.

Thank you, Philip, it's a nice explanation. I wasn't aware of the fact that these are the world record holders. I was wondering why they stopped at Schult and haven't included names like Riedel, Kanter or Alekna. I have an idea for the plumbers as well.

Thanks Stef!
Mythic Birds are a nice surprise indeed, Martin. And I will learn to love, or at least to admire, clarinet(s). I promise!