Music and sound to challenge your mind, body and soul. Yes, the guitar can be so many things ... 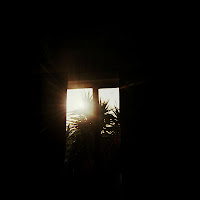 After the 2009 New Bodies LP always on his Thin Wrist Recordings, Peter Kolovos is here with his second full-length solo guitar effort and, if possible, he delivers an even more challenging work. If you know him already, you could say that listening to the sharp and strident sonic pilgrimages on guitar of Kolovos is a tough job but somebody’s got to do it, because the experience is strong and always rewarding.

I’d define his approach as maximalist being just the opposite of the minimalist style of other emerging and noteworthy guitarists as Manuel Mota or Filipe Felizardo. He seems not interested in any concession to harmony or intelligible structures; he hits the listener as he hits the guitar, never caressing a string, never sketching something that is less than a total, in some way aggressive, act of sound with no compromises. You may say there are no real tracks to analyse in this work, but there is for sure an approach to understand.

According to the liner notes “he draws form from open sequences of sound events merged and propelled by a distinct internal logic. In his music Kolovos attempts to erase the line between intent and impulse and to create sounds that are immediate and unrepeatable”.

He in fact progresses through hiccupping and fragmented stabs on the strings up to discordant walls of massive distortion where whistles and feedbacks fuel the creation of brief bursting drones and tides of feedbacks. He works unconventionally with reverb and delay, some of the notes pouring out of this stream sound more as early electronics samples than traditional fingering, remembering the tones of some vintage sci-fi movie. The fragments living in this work sound initially as schizoid dialogues between two voices. The first is prolific of dense shades of distortion, it is fractured by waves of delay, it is noisy but rational; it is the canvas waiting for the brush. The other one is stinging, shifty and unpredictable, it answers with howling high-pitched peaks plunging in the vortex where the first tries to swallow it. But you can’t really understand which one is chasing the other, which is attacking or how the other will defend its nature. They merge suddenly as they break up. You can’t relax, you can’t grow fond of a sound. Kolovos operates in the constant deconstruction of any musical meaning and coherent context. When you understand, he’s already gone ahead.

Black Colors is released as a triple vinyl housed in gorgeous heavy cardboard slipcase, each vinyl is then inserted in another slipcase with some interesting pictures based on the subjects of lights and darkness, specifically realized and coupling with the music. The vinyl is mastered at 45 RPM, and this means that if you have a decent record player and you’re so brave to close your eyes, maybe you will believe that Kolovos is there just behind you torturing his guitar. But I admit that if you’re not in the right mood, this image can be pretty scary. 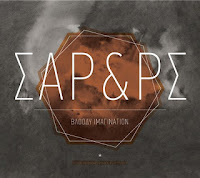 If Stanley Kubrick had known “Bloody Imagination” in 1968 he might have used it as a leitmotif for the appearances of the monolith in “2001 – A Space Odyssey”.  And if we follow one of Margaret Stackhouse’s interpretations according to its meaning it could stand for the “incomprehensible, -- man, with his limited senses, cannot comprehend the absence (perfect black) of color or light”.

“Bloody imagination” tries to transform this idea into music with this 52-minute sonic sculpture in which the four musicians (resonator guitarist Tetuzi Akiyama already produced this album in 2004, with Naoaki Miyamoto on mid-high frequency electric guitar, Utah Kawasaki on mid-low frequency analog synth, and Atsuhiro Ito on low frequency optron) put up layer after layer of extended frequencies with crass overtones and gloomy, penetrating sounds. It is an unsettling piece of work, pitch-black and mesmerizing, especially towards the end it is even hard to bear. The track starts with a deep buzzing which reminds you of a sputtering motor before high pitched whining, buzzing or hissing noise is added. There is something absolutely brutal in this strange beauty, in its bareness, in its naked sounds, like listening to a constant uproar in your guts and a tinnitus simultaneously. What makes it even more mysterious is the fact that there is no rhythm although there is a certain structure discernable.

But is this even a guitar album? Of course, since the day Keith Rowe has laid his guitar flat, decided to abandon traditional guitar techniques and prepared his instrument manipulating strings, pick-ups, toggle switches and volume/tone knobs turning it into a huge sound processor (according to the liner notes Akiyama uses a samurai sword with his guitar and I don’t want to know what he does with it). Or since SunnO))) have concentrated on pure atmosphere building up huge doom drones instead of using conventional forms.

This is definitely not for the faint of heart. But maybe for you, Paolo.

This short clips says more than my review: