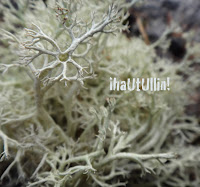 If Genghis Khan had played electric guitar, he may have sounded like Markus Pesonen on "Klein Bleus", the opening track of this album. Put it on full blast and entire populations will flee in anguish for his burn and destroy approach, adequately supported by Hakon Berre on drums.

Yet before you know it, the duo illustrates the subtlety of contrasting sounds with "Joutoma", brought by sensitive slide guitar, and thanks to the great percussion and electronics an overall sentiment of sadness and doom is maintained.

"Night At The Toy Factory" is more bizarre, with electronics and distorted sounds creating an odd soundscape full of unexpected events.

In essence, every track shows how the limited line-up of guitar and drums can bring completely different approaches, but thanks to the great artistry of both musicians it remains a coherent story, with a unique atmosphere and sound that maintains its focus despite the variation. You can hear fluid Indian sounds on "Mjölne", crispy electronics on "Monkey Rat Attack", , rage on "Quantum Foam" and "Short Circuit", space-age signals on "Tarantula Nebula", a more rockish style on "Discothèque", tintillating freshness on "Brahmanda", and slow undistorted beauty on "Nuts", which ends the album in an atmosphere of peace.

Even if this is in essence a guitar-percussion duo, both musicians use every kind of tool but the kitchen sink - although coming close to the latter by not only using ringing bells and chains but also tin pans, pot lids, tea towels, forks and chop sticks.

The great thing on this album is the music, no matter how it is brought, yet the unconventional approach adds new textures and offers at times fascinating listening moments.

Rage and gentleness - all on one dish : enjoy!