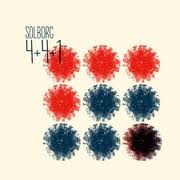 Well this is one of those discs I wished I'd heard earlier, it would definitely have been on my top CDs of 2012. Anyhow, it seems this one,like a few others we're reviewing recently, slipped through the net and got left to one side. Furthermore ILK has steadily been releasing some excellent albums over the past few years, some of which have been reviewed here and often with very positive remarks.

I remember reviewing another record of with Mark Solborg (see below) which also impressed me. His ability to cross between improvised and composed seems one of the major strengths in his style. This extended line up also moves very gracefully between completely improvised passages into beautifully written material. His writing uses a rich mixture of brass that includes a tuba and a bass, really giving the music real punch yet also bringing a very warm and rich sound to the ensemble. The group playing is very high quality, judging dynamics, solo space, tempos and open improvised sections down to a 't'. There isn't one wasted minute on the record.

Looking at the musicians below you'll notice Chris Speed, the +1 in the ensemble. His solos when they appear are spot on as always, but it's refreshing to hear that Solborg didn't over use him, giving over plenty of space to his other musicians as well. One voice that stands out is that of Gunnar Halle, a fine trumpeter from the same lineage as Arve Henriksen or Jon Hassell. Halle gets to shine on the delicate '2620' (tk2), sounding like a voice echoing in a valley that drifts around you in the early morning air. He also unites the ensemble on the excellent 'The Whispers' (tk4), where along with Anders Banke's fine bass clarinet playing the two horns rise above the group, gradually bringing them back together like a feather landing. Solborg takes a 'modest' position in the group, adding dynamics, chords, doubling melodies (etc) as needed. But of course he leaves his mark not only with his very subtle interjections but also with the immaculate compositions.

The music is so full of details that I expect every listen will bring out new details. Furthermore they are all fairly lengthy pieces, which makes for perfect listening. Every one - five in all - has something unique, an ambience, or a theme which is developed throughout the composition by using free improvised sections, ostinatos, silence and hard hitting themes. A theme like 'Almost' (tk3) unfolds from a simple drum/tenor sax duet into ensemble passages which each time open up to more collective improvisations, yet unknowingly we are transported into a menacing theme which has somehow crept in without anyone noticing. All this simply shows how well this music has been crafted together, and was probably, from what we hear, a great concert also. However, luckily for us it's all on the record, so to say!

For all those interested you can get a listen via Deezer .... before buying!

p.s. Look out for Solborg's new record (reviewing soon) with his quintet including Herb Robertson and Evan Parker ... great stuff, I can assure you!

Some of Ilk's releases reviewed on our blog here:

This is awesome. Thanks for introducing me to this album, and the works of Solborg.