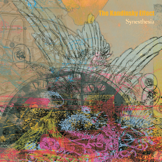 The Kandinsky Effect: now here is a band built to tumble—meaning, they will deconstruct your pre-conceptions. Thinking about them, you might be tempted to go off on an overly-intellectual tangent involving art theory, neurological studies or the finer points of rhythmic displacement. But there’s no need for that. Just stay in the sway of a clave feel and let their synesthetic sensibilities infuse you.

The Kandinsky Effect is a trio composed of Warren Walker (saxophone/effects), Gaël Petrina (acoustic and electric bass/effects) and Caleb Dolister (drums/laptop). Without a chordal instrument, and with the addition of restrained electronica (often put to the service of harmonic layering), walls dissolve and cross-boundary work ensues. Like their namesake, artist Wassily Kandinsky (1866-1944), these players move to connect the seemingly non-related.

With the album, Synesthesia, the sax takes on a very clear and direct role. Walker is not afraid of space and not afraid to embrace a legato feel, and his choices feel quite radical that way. He also creates arcs of phrasing that seem to move from tune to tune – almost as if working over the bar line of the track list (!?!).

As for Petrina, his groove will appeal to dubstep fans into subliminal bass sound exploration as well as lovers of jazz innovators such as Jaco Pastorius. Petrina has lived all over the world and carries forward a wide swath of styles and traditions with a soulful intensity all his own.

Rhythmically, the Kandinsky Effect offers a grand array that combines rave-inspired electronica, dexterous high-end heavy metal, classical pastoral work, bass-driven contemporary jazz and the Zen idea of the Beginner’s Mind (meaning open to what is not yet). I got some quotes from band members in order to illustrate some of their rhythmic concepts (which in their case also enhances understanding of melodic concepts):

“Left Over Shoes,” began as more of a rock tune for larger ensembles. Caleb Dolister remarked that the earlier version of his piece was originally written in 4/4 and “heavily relied on thick layers of distorted chords to create its personality.” For this trio situation, the updated melody evolved to “traverse the harmonic concept that was previously spread out by the chordal instruments.” Mr. Petrina adds that rhythmically in Shoes, “the idea with the moving meters (alternating between various measures of 4/4, 6/4, 7/4 and 7/8) was to accentuate the rhythmic phrasing that I felt was natural to the melody.”

Other rhythmic details include “Walking” which changes from 13 to 7 to 5. “If Only” is in 9/4 and grouped 4 + 5 “with a free section that can go anywhere it wants depending on the night” (Petrina). “Brighton” is a rock ballad with a solo section in 13/4 + 11/4. Mr. Petrina goes on to explain that generally, “When playing over the more unconventional odd meters like 13/8 or 17/8,” he would rather “internalize the groove or clave rather than actually count up to thirteen or split it up into 6/8 + 7/8 (as) this frees you from the boxed-in feel…” He also takes care to emphasize that: “We don't write those sections to be in a particular time signature to be difficult, that’s just how they come out.”

Stay open, and you’ll feel it.