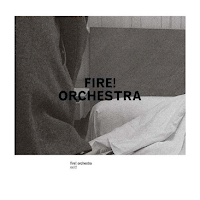 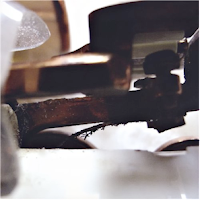 In 2012 I reviewed eight albums by Mats Gustafsson and gave all of them high ratings. Being skeptical of the possibility that a musician could knock out so many albums of such a great quality I resolved to be more critical in 2013. So, when I enlisted for Fire! Orchestra, I decided to set the benchmark for top ratings extraordinarily high.

Nevertheless, I am very excited when the Rune Grammofon package arrives, knowing that Gustafsson has never been the leader of such a large ensemble before. I put the CD in my player, turn on the volume, sit down with my cup of tea ….. and immediately “Exit! Part One” sweeps all the New Year’s resolutions away like sand castles on the seashore before the relentless waves of the oncoming flood. I am staring at my speakers, mouth wide open. A simple bass riff consisting of three notes only is creeping out of my hi-fi unit, it is dark and compelling. I feel like a character in a William S. Burroughs novel. Am I on drugs? Is there something in my tea? On top of psychedelic blues guitars two female voices keep telling me: “Exit all areas / Fire stay with me”. This is not jazz – it’s SOUL! A Doors-like Hammond organ creeps in, I am obviously in the middle of a service, I cannot help rocking to and fro, I am even headbanging. But I can’t stand up, sharp reed movements nail me down. If my neighbors watch me through the curtainless windows they might call the police because they think a strange ritual is going on in my apartment. Maybe they think I am suffering from convulsions and call an ambulance. “Exit! Part Two” even sharpens the tension, the first ten minutes are based on a heavy and monotonous Kraut rock guitar riff before the whole thing finally disintegrates into free jazz.

I am not quite sure what I expected:  A “conventional” free jazz or free rock album? Whatever it was, this here is totally different. It is a manic bitches’ brew of Miles Davis in his “Get Up With It” era, Sun Ra Arkestra, hysteric Arabian laughing gas interjections, Isaac Hayes, CAN, Deep Purple, Cream and on top of all there are voices like Jeanne Lee and Grace Slick.

Fire! Orchestra consists of almost 30 musicians (3 voices, 4 guitars, 4 drums, 4 basses, 6 saxes, 3 trumpets, a tuba, a trombone, an organ, a piano and electronics), among them (in addition to the regular Fire! core line-up of Gustafsson,  Berthling and Werliin) some of the usual suspects like Magnus Broo, Per-Ake Holmlander, David Stackenas, Sten Sandell and Raymond Strid, the lyrics are written by The Ex vocalist Arnold DeBoer.

I know it is only January but I can hardly imagine so many other albums outdoing this album (at least for me). Here I stand (or rather: sit). I can do nothing else.

But Gustafsson does not always dissolve boundaries creating expanded ensembles, his other side is extreme reduction.  He has released lots of solo albums, for example his fabulous and strictly limited trilogy Mats G plays Albert A, Mats G plays Duke E and Mats G plays Gullin (among many others). One of his most interesting solo performances is Needs, on which he uses a whole bunch of electronics to alienate the sound of his instrument. Renouncing electronics and overdubbing here, Bengt is closer to the aforementioned solo trilogy because Gustafsson reveals his roots and influences once again. The album is dedicated to Bengt Nordström (1936 – 2000), who has been a mentor for Gustafsson, and although his own playing and work is different, he has adopted Nordström’s style and sound here using a classic Grafton saxophone (a plastic alto sax that was used by Charlie Parker, Ornette Coleman and Nordström himself). Especially the second part of this spontaneous improvisation displays Gustafsson’s wide range of possibilities. For the first five minutes you hear somebody breathing, it sounds like a tracking dog on the trail of a scent before the track opens up for a delicate melody, everything is almost relaxed compared to the tightly clipped fragments of the first part.  You can even find allusions to the Star Spangled Banner before guttural tones, painful shrieks and long spells of silence take the tune away to atonality again.

The album is knee-deep in jazz and on the other hand wrapped in sound explorations and extended techniques. The more you listen to it, the more you will appreciate it.


Listen to an excerpt of Fire! Orchestra here:

Exit! can be bought from the label: www.runegrammofon.com

Bengt is available as a limited white vinyl edition which includes a CD version of the album. It can be bought from instantjazz.com.

I too was blown away by the Fire Orchestra!!!!

The Fire! Orchestra - Exit! album completely swept me off my feet as well. Knocked my socks straight off. Phenomenal stuff. Already a high watermark for 2013.