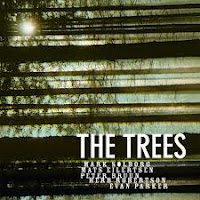 
This is one hell of a record, and - for me - yet another direction taken by Mark Solborg. Solborg seems to be able to take elements of music and mould his writing and the choice of players to get the best out of them. On previous recordings such as '4+4+1' and 'Hopscotch' the music has been more 'conceived', whereas this project obviously relies on team work. In fact what stands out on this recording is the empathy between the players and the natural group sound, everyone places themselves at the service of the music. One example that stands out is Peter Bruun's drums. He probably never really hits the drums in a way one would expect to hear from this instrument. He uses his kit in such a subtle way that you only realise that the drums are not 'in your face' quite late in the recording. He plays percussion as well on this recording which may account for the subtlety of the silent sound approach. It makes me think of some of the Supersilent and early Food records where Deathprod (Helge Sten) took out instruments giving the music space, which often has more impact.

Describing the individual tracks on this record isn't really very helpful as in reality the album works best as one whole piece/listen. Once you've pressed the play button you'll find yourself in a dark world of sounds which keep you fixed to your sofa. I imagine you could pick out 'a' track to listen to, but the atmosphere of the combined tracks seems more natural for a listening experience. There are moments where the sax of Evan Parker or Herb Robertson's trumpet come right to the fore such as the opening track. The two horns play a mournful duet which suddenly stops to let Mark Solborg's guitar step forward playing a solo as if accompanying a silent partner. The music steps off from this point never looking back. I could name a few moments where each instrument takes it's place as the principal voice, but probably the fact that the others decided 'not' to play is of equal importance. I should add that there are several tracks where the horn players play kalimbas or other percussion instruments which adds some very nice textures to the music and of course adds even more space.

The majority of the music is restrained, not unlike the cover photo, and comes across a little like sunlight trying to break through a dense forest. Picking an extract from this record is extremely  difficult, after all where to break into the flow of things? Finally I just went for a short piece called 'Dogwood'. The group goes into full flight for just a few minutes before plunging back into the silent filled gaps of the record.