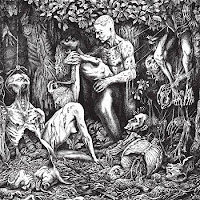 What we see - On a field of carcasses, bones and (what I assume are) kilometres of viscera we see hanged and tortured corpses (how did they die?) and a romantic as much extreme cannibalistic hug between two undead characters. We are in a pretty eerie forest.

What we read - Massimo Pupillo plays “low end bowel chainsaw” Paal Nilssen-Love plays “battery of total limb annihilation” and Lasse Marhaug takes care of “electronic torture devices”.  The track-list of the two sides of the LP is as follows:

Second Coming
B1. Rib Cage of Rotting Brain Mush
B2. Feast on Infected Pus
B3. Forest of Grotesque Copulation

What we fear - Will my ears bleed?

What we hear - The album is really less noisy than it would be reasonable to expect after all the aforementioned references to the dark, industrial and death metal context. Sure, the sound is vicious, buried under the mantles of distortion and feedback provided by Marhaug’s equipment, but still the inner nature of the jazz heritage is strong and perceivable in the structures and in the development of the composition that the combo deploys. The subdivision in different tracks is obviously ironic and fictitious. This is a long and coherent live act of improvised music. Nilssen-Love is at his best, switching at ease from background feverish cymbal carpets to massive crescendos.  But the cherry on top here is Massimo Pupillo, free to run alongside the fretboard of his bass with tons of distorted chords, fragmented and syncopated phrasings, waves of noise and notes sustained so long that they seem to transfigure in orotund engines running. Two remarkable moments: the bass solo at the beginning of side B together with the moment when the drums breaks in for an explosive interplay and the almost prog-rock gallop growing in the middle of the same side. Marhaug is there to open all the circuits of his devices and to embroider sci-fi lullabies in the warp of his mates.

What we learn - Sometimes ago Stef used the definition “Doom Jazz” reviewing an album by the Italian trio Zu - maybe not by chance Pupillo is featured also in this group. I think the same tag fits also to this album.  Maybe dirty, but still clearly jazz!

Listen some and buy the ghoulish and enjoyable object from the label.