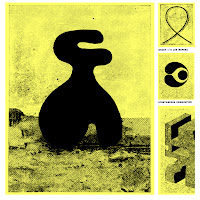 There is something deeply intimate in the about eleven minutes of wait and evolution before the real explosion of interplay -- it's a long, slow, precious dovetailing of musical relationships between four great musicians. Joe McPhee starts needling the others through the raucous timbre of his pocket trumpet, balancing some meaningful rich phrases with blown passages. The scattered pizzicato incursions of John Edwards rebound Steve Nobles' sharp bells, muted gongs and minimal percussion. The organ of Alexander Hawkins starts its journey from another world, on sustained high pitch tones slowly developing a second voice in search of dialogue. Then Edwards takes to the bow, moulding low magnetic chords and Noble’s rolls becomes sumptuous. It’s like watching a group of kids discovering the pleasure and the joy of “playing” together. Organ presence becomes total, though never invasive. Hawkins goes for a luxuriant solo exploring all the colours and the tones offered the by large palette of his instrument, his fingers running along the two-floor keyboard in an endless spiral. He saturates so much the atmosphere that sometimes the result is like a vibrating cluster of unrecognisable and mesmeric chords.

A Hammond B3 tends to be an overwhelming instrument, not just for its size, and the detractors of prog and psychedelic rock, as I am sometimes, can be doubtful about its role. But it really works well in this set.

On the second side, McPhee unsheathes his alto sax giving a different bluesy slow imprint to the sound of the group, while the rhythm section endorses him with sudden time changes.  Edward’s bass turns out a darker sound. He first dialogues melancholically for several minutes with McPhee while Noble slows down and snaps the rhythm, then he makes his bow scrape a short and involving solo in the instrument's lower register. Finally, he faces a real challenge, playing against the beats and wooden inlays of the drummer. I wonder if it’s McPhee screaming somewhere there in the middle. It’s around about at the time of Noble’s astounding solo on metals and plates enhanced by the water drops effect of Hawkins organ. Soon, the quartet re-joins and closes in a boppish manner.

I can’t be wrong: this is definitely genuine, joyous, satisfying and great jazz!

The recording stands as testimony to the second set of the first night of Decoy’s two-day residence in Café Oto during October 2011 featuring Joe McPhee. The LP, the second OTOroku official release, is pressed in 500 copies and housed in a really nice and original two colours sleeve screenprinted on extra thick raw cardboard.

You can listen to some minutes of the recording provided by the label, where you also find a good video of that evening.

When I had a look at the band's line-up I was really skeptical because of the organ which is not one of my favorite jazz instruments but Alexander Hawkins simply blew me away. The sounds are so organic, especially on the A-side, that it is pure joy listening to it. Like Peter Brötzmann I also tend to prefer McPhee on the pocket trumpet (even if he is an outstanding saxophonist, of course). Definitely a great record, I couldn't agree more with the review here.