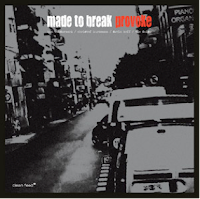 If Made to Break’s album “Lacerba” deals with futurism, “Provoke” picks up the thread as to musical structure and philosophical references. Although the music is composed “the material is modular and parts can be combined spontaneously by the various members of the band, so the structure is improvised as well as the solos,” Ken Vandermark said. The three titles of the tracks make up the sentence “Further presentation of the facts” and they are dedicated to influential geniuses of the 20th century – John Cage, Buckminster Fuller and Marshall McLuhan. Like the futurists their ideas and works were revolutionary and therefore provocative, Cage as to music, Buckminster Fuller as to architecture and technology (among others) and McLuhan as to philosophy and media theory. Of course Made to Break do not have the ambition to be as revolutionary as these giants, a lot of things have changed since then, that’s why provocation is hardly possible or has to be different.

“Further (for John Cage)” has the same threepart structure as the tracks on “Lacerba”, it starts with an old-fashioned sax-drums-duo before the bass ends this improvisation interspersing an irresistible rock groove backed up by Kurzmann’s electronics providing simple sound layers and surfaces. This is much closer to alternative rock than to jazz. Tim Daisy destroys this atmosphere and heralds the third part in which the musicians seem to have lost one another before the electronics provide a pattern on which the others can agree with a new structure. The track ends with a bassline that sounds like Bill Laswell and with Vandermark being back on funky grooves.

“presentation (for Buckminster Fuller)” provides a similar architectural structure. It starts like a soundtrack for an old David Lynch short film (bass flageolets, static, helicopter sounds) before it changes to a lyrical part dominated by Vandermark. Hoffs forces the pace throwing in a Mike-Watt/Minutemen-riff and the rest of the band make use of this – it is a great SST moment (my favorite label of the 1980s).

The most lyrical track is “of the facts (for Marshall Mc Luhan)”. It uses the same compositional elements again and arranges it in a new way, especially Vandermark’s No-Jazz-riffs work in a great way.

This is a promising band and I hope there is more to come.