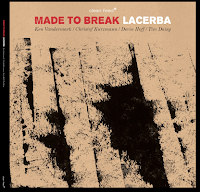 “Lacerba” was the name of an Italian literary magazine that wanted to spread the ideas of futurism, a movement emphasizing and glorifying issues associated with concepts concerning the future - including technological progress, youth and violence. The most famous authors were Giovanni Papini and Ardengo Soffici but Tommaso Marinetti, Pablo Picasso, Guillaume Apollinaire and Stéphane Mallarmé were also among the contributors. Futurist music claimed to reject tradition and introduced experimental sounds inspired by machinery, it was mainly set against backwardness and mediocrity. One of the most prominent figures, Luigi Russolo, published The Art of Noises which became something like a guideline for the musical aesthetics of the movement. Russolo defined instruments as acoustic noise generators so that he can pay homage to, include or imitate machines – his ideas influenced Stravinsky, Edgar Varèse, Stockhausen and John Cage.

Ken Vandermark (reeds) has a profound knowledge of classical music (he studied with Morton Feldman) and although he does not completely reject tradition his new project Made to Break pays tribute to the futurist era not only because electronic noise plays an important role in the band context, which features Christof Kurzmann (electronics), Devin Hoff (e-bass) and Tim Daisy (drums).

Like classical futurist music the first track, “Vita Futurista (for Dick Raaijmakers)”, imitates technology, a dark baritone saxophone sound reminds of a foghorn before the real machine sets in: Kurzmann’s electronics sound like a limbo created by Edgar Allen Poe, there are static loops, a pulsing and scraping that gives you the creeps in a very subtle way. But futurism is not only about darkness, and after four minutes, when the bass turns in playing a super groovy Michael-Henderson-riff and Vandermark slaps out a soulful theme, the band has transformed into a 1980 New York No Jazz group – raw, funky, straight, hardcore. And just when you get used to it, the band makes another U-turn and after 17 minutes – out of the blue - they devote themselves to absolute beauty. The structure of the “Pursuit (for Alberto Giacometti)”, the second track of the album, is similar to the first one. It starts with a very lyrical passage which is close to chamber music before it turns into something completely different. Vandermark’s alto is close to the pain barrier and only Hoff’s electric bass brings him back to solidly grounded jazz rock. Hoff is the driving force in this track anyway, the copula between the different parts.

“Lacerba” is futurist in a postmodernist sense, it uses different elements of jazz history and combines it to something new.

where the hell does this come from? i just bought" provoke" and haven't even heard from this one. damn

heard OF, that is

Lacerba is an LP release, only avaiable at 20th april. Am i wrong?
It is the first LP released on Clean Feed label, and that is a awesome new.
The link to buy at Instantjazz in this post give us Ballister "Mi Casa Es En Fuego" album.

Anyway, it is a great review by Martin. Thanks.

This album is great!
Thanks Martin for the interesting review and the detailed historic overview.

Thanks Rui for pointing out the link issue ... it will be fixed and back soon ... 'Provoke' is up next.

A couple of errors here:

"Ken Vandermark (reeds) has a profound knowledge of classical music (he studied with Morton Feldman)..."

Ken did not study with Feldman. You may be thinking of Vandermark 5 member Fred Lonberg-Holm.

"Vandermark’s alto is close to the pain barrier..."

Ken does not play alto.