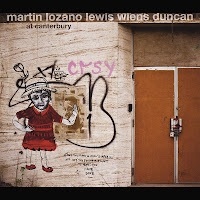 Thanks to a suggestion from a devout reader on the comments section of my Canadian Round Up review, I was led to this recording from another Canadian group by snooping around for the groups on the Barnyard web site. I must admit, I would have entirely missed this if it wasn't for his ear to the ground back home. Could have been one of my biggest mistakes of the year.

First of all I will address my elephant in the room. I have never been a fan of vocal jazz. Why don't I like it? Is it the one sound that humans make that is the most human? Is it because the lyrical is the most literal? Is it because all attention is shifted to the voice once it starts?

Christine Duncan provides the vocal on At Canterbury and it is a cross between a soprano saxophone, film ambiance, an angry cat, and an aboriginal field recording. And it works. As much of a force as she is, she doesn't dominate or draw attention away from the great moments the rest of the group provides. On "Throwing Light", she cleverly uses the theremin to further blur the lines between voice and technology and my preconceived notions by adding a eerie sci-fi counterpoint to her growl.

Rainer Wiens (guitar and mbira) has a long history of composition and admiration for world music and intrinsically contributes to Duncan's drama. This is best exemplified on the track "Corollary" where his mbira is the main focus. One of its keys has a nasty buzz. The buzz returns often, and over time, I was happily expecting it more than being annoyed by it. It became an instrument within an instrument.
Jean Martin (drums and percussion) is all about the power of choice. Half of the time, he let's things sit in their place adding just enough clever to propel the track and leaving the need to engage to others. The half of the time he turns it up with a military beat that shows his skill on the snare as he plays with power and nuance at the same time. He has also been tasked with the job of keeping the other half of this group together with the first half.

The second half, comprised of Jim Lewis (trumpet and flugelhorn) and Frank Lozano, (tenor and soprano saxophone) make their own mark in various different ways throughout by keeping their improv and free jazz sensibilities in the forefront despite the rest of the group's complexity. On "Patience Game", they trade long singular lines that leads into a wonderful conversation as Martin drums up a storm behind them. They will not be overshadowed even as they get to the outer reaches of there respective registers or when Duncan adds another layer of bandwidth pushing them to break away and explore on their own.

Can be purchased from the label or downloaded from emusic.

This is a recording to be savored as the gifts here keep giving as my ears keep smiling.