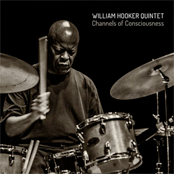 In some of my reviews I have mentioned that I come from an alternative rock background and therefore I am a late bloomer as to free jazz, although I have been interested in this music for a very long time. Lately it has become more and more boring for me to listen to country, folk, pop, techno, metal and other genres (although there have been great albums in 2013) and there is a simple reason: rhythmically there is no other music as fascinating as free jazz, and William Hooker is one of the most exciting drummers out there. If you listen to his last album on NoBusiness you will know what I am talking about.

Recorded at Roulette in New York City, Channels of Consciousness is a rollercoaster of polyrhythmic madness, which is hardly surprising regarding the fact that the rhythm section consists of Hooker on drums and voice, Sanga on percussion and Adam Lane on bass. The whole set starts with the three outlining the musical framework before Dave Ross (guitar) and Chris DiMeglio (trumpet) join the crew contributing tons of cracked solos full of fragmented and dislocated phrases. The tracks elegantly flow into each other, though, Ross’s guitar reminds of Sonny Sharrock’s lines for Last Exit which makes an interesting contrast to DiMeglio’s both lyrical and tense playing. Especially the first part of the set is like sitting on a raft going down a wild stream, the music takes you here and there and up and down, it is an adventurous furor.

The second part of the album is full of moments of rapture, too, for example when DeMeglio delves into Don Cherry phrases at the end of “The Unfolding” playing eccentric and jumping phrases or when Hooker cheers Ross on in “Character”.  The slide guitar slaps out razor-sharp sparkling notes sounding like splintering glass, this part is of both a fierce liveliness and deep sadness. Ross is supported by Lane’s arco drones and Hooker uses this moment to recite his stream-of-consciousness poetry about a “life’s decision”, a family drama continued on the last track, “Mother’s History (untold)”, and as in Hooker’s poetry there is a musical stream of consciousness as well telling us that there are decisions to be made – in life and in an improvisation - before DiMeglio’s trumpet transfers the track to the next one, “Connected”.

One of the greatest qualities of this album, which ends with percussion fire as it has begun, is that it draws on the blues, African rhythmic complexity, and classic free jazz. However, it builds bridges to contemporary improvised music as well. One of last year’s forgotten gems.