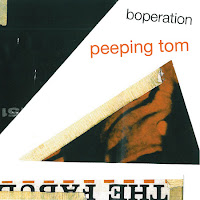 In their constant effort to work and develop the music of bebop pianists Peeping Tom feature the music of Herbie Nichols on their new album, a man whose influence has been underestimated for a long time. Being a classic musical outsider in the bebop world of the 1950s he tried to combine traditional and modernist aspects in his compositions and could therefore be compared with Thelonious Monk.

Peeping Tom's idea is to bring these dynamic and energetic forgotten bebop gems back to light by re-modeling them and take them on an even more abstract journey by stripping these harmonically rich but also concise compositions to the bones. One simple reason Peeping Tom, which is Axel Dörner (tp), Pierre-Antoine Badaroux (sax), Antonin Gerbal (dr) and Joel Grip (b), have to do this is the lack of a piano in their line-up, which is why a different approach as to harmonics becomes necessary. Nichols’ most obvious stylistic devices are the break and the call and response scheme and this group extends them to a new limit. Especially Dörner and Badaroux introduce the melodic themes just to let them drop and pick them up again, the whole band stops and starts almost arbitrarily (although it is intentional, of course). A good example is “Cromagnon Nights”, a track Nichols wrote when he was wondering how a Neanderthal would spend his Saturday night. The band presents the theme in rhythmically accentuated unison staccatos before they seem to fall apart in a long, almost free collective improvisation until two harsh breaks make them come back to the original theme again. It is the most interesting aspect about this band that they try to combine bebop riffs with free jazz and intellectual sound exploration.

At the festival météo in Mulhouse last year there was a magic moment in Peeping Tom’s set: While the band was playing a rainstorm started outside and heavy drops were falling on the roof-lights so that it was really audible especially during the breaks of their music which had an effect like listening to an old scratched LP. The musicians were puzzled first but then they enjoyed it and even seemed to enlarge the breaks being aware of the fact that a special element was added to their vintage approach at that moment. Peeping Tom is knee deep into Nichols’ highly emotional world, in his torn phrases and complicated chord substitutions. Obviously great fun for both band and listeners.

Watch a short clip about the band here:

If you like Die Enttauschung you'll love this one.
Thankfully, very little in the way of "extended techniques" -- just great playing by all concerned.