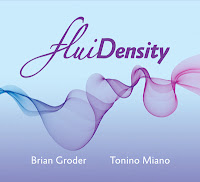 Brian Groder and Tonino Miano's FluiDensity is the work of a duo so conversant and solid that one could imagine that they were working off rather dense charts rather than engaged in the give and take of pure improvisation. Groder's melodies are quite engaging and Miano's imaginative accompaniment never fails to be supportive.


Groder is New York based trumpeter and flugal horn player and has garnered enthusiastic reviews on this blog before. His partner on the recording, pianist Miano, also from New York, and is an educator and musician. Together they have made an album the straddles the line between classical and avant-garde jazz with accessible spiraling melodies and evolving improvised ideas. Miano has a strong rhythmic drive to his playing, even when he's playing quietly, that provides a nice buoyancy.

'Optika', the opening song, starts with Groder's unaccompanied trumpet playing an intriguingly convoluted melody. When Miano joins, his counter melodies match in pace and phrasing, giving the tune a rhythmic boost. The wide ranging  'Depth of Field' begins with oblique passages on the piano and insistent melodies from the trumpet to moments that have a folksy openness that bring Aaron Copland to mind. The album as a whole breaths, expanding and contracting, leaving space for listener to ingest, digest and reflect and then do it all over again.

FluiDensity is a rather it is an imaginative and sophisticated album of dense, fluid, melodic and intriguing improvisation.