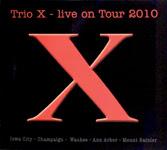 I remember that I once saw the Schlippenbach Trio with a friend of mine, who was a film student then. He had invited one of his professors to accompany him. The professor, who hadn’t been to a free improvised concert before but who had some preconceived ideas about free jazz, was disappointed when he found out that the trio was a long-lasting group and stated that it was hardly possible to improvise freely with such a history, because to him free improvisation was only possible if the musicians don’t know each other to well. So, he claimed, this trio reminded him of an old couple walking along beaten tracks, hovering listlessly in the free ocean. Even then this struck me too simple an explanation for permanent cooperations and today I know that there are many projects that prove the professor wrong.

Trio X is such an example, a group swinging back and forth between tradition and free improvisation. It has existed since the late 1990s and consists of Joe McPhee (tenor, soprano, pocket trumpet, flugelhorn), Dominic Duval (bass) and Jay Rosen (drums) – and they are always ready for the unexpected, which has been very well documented. Only in the last few years CIMPoL has released a 7-CD-box about their 2006 tour, a 5-CD-box about their 2008 tour and now there is a 4 CD-box about their tour in 2010 presenting concerts in Iowa City, Waukee/Iowa, Ann Arbor/Michigan and Mt. Rainier/Maryland. Stef has already been very enthusiastic about the first two albums and I absolutely agree with him.

Surprisingly for such a line-up, the group’s repertoire is based on originals and on standards and classics like Naima, Round Midnight, My Funny Valentine, or Nation Time and they interpret them respectfully and freely at the same time. Nation Time, for example, starts very close to McPhee’s original with the band sticking to the theme. But then it seems as if someone had opened the windows and the notes were blown away so that they just forgot about them and created a very different piece never losing the original out of sight, though.

It is fascinating how Trio X treats this material. The musicians are masters of thematic improvisation, you can find the character of the motif in each phrase of the improvisation, very often either the rhythmic or the melodic shape remains – even if it is compressed or extended.  The central motif is constantly altered and while listening to it from different perspectives, its meaning is permanently changed and renewed.

As a microcosm for their approach serves Going Home, a traditional that appears three times on this album. In Waukee it is mostly a duet between McPhee and Duval, both interact very tenderly, especially Duval plays very discreet lines. Rosen only adds some spots here and there, he is hardly present, like a ghost randomly firing around in the background while McPhee dominates the version with his varied and masterful blues style. The track speeds up after six minutes when Rosen uses a swing beat which almost immediately falls to pieces. There is the same structure as in Nation Time again. In Ann Arbor they play the same track in a condensed version, Duval is much more in the foreground as well as Rosen, who is present from the very first minute. McPhee concentrates on the melody holding the track together and the swing part is only indicated here. For the gig in Mt. Rainier the trio combined Going Home with Naima. It is the most melancholic version, again mostly a McPhee/Duval duet, but the swing part is completely missing here, there is just a rush at the end.
The group is very aware of jazz history which is made clear in the Waukee performance: The gig’s playlist consists of lots of reminiscences and tributes for the late greats when you look at titles like For Jackie and Abe and a Fullish Feast, For Sirone (of course a bass solo), For Tony Williams (a drum solo), For Trane’s 84th HBJC, Not Quite Midnight or More Monkin’ in Evidence. But this does not mean that they act like an old couple, it is just the opposite – a fountain of youth. Another almost forgotten gem of 2012.

Can't find any European availability for this one, and US purchasing looks a bit iffy. Pretty soon, we'll be reading reviews of CDs and LPs so rare, the reviewer will possess the only remaining copy :-).

Sorry for the mistake, Bogdan. The other two releases look very similar, which might explain why it happened. But thanks for remining us. We have fixed it in the meantime.
I haven't checked the European availability, Colin, I am sorry for that as well. Although I am German I bought it from squidco.com. But I can understand that it is quite expensive including the shipping costs. I wanted to review it nonetheless because it is such a great album and Stef has reviewed the other albums, too.

Of the 3 boxes they've released, which do you think is the best in term of overall quality? (Sound quality, performance quality)

This is really difficult, premo. Sound quality is very much alike on all three CIMPoL releases, unfortunately the first box (2006) was limited and is hard to get. You can get the second box much easier (via squidco.com for example). My favorite Trio X album is Live in Vinius, but it is only available on vinyl (which is not the reason why I like it so much even if I am a vinyl supporter, it's the music and the sound quality). Check it out here: http://www.youtube.com/watch?v=-zAY5MJqedo
Stef has also written something about it: http://www.freejazzblog.org/2008/12/trio-x-live-in-vilnius-nobusiness-2008.html
I hope this helps at least a little bit.