If you have ever had the chance to talk to Mats Gustafsson about vinyl you know how enthusiastically he is about this issue. I guess he would release more 7-inches if he could, once he told me how glad he was finally finding a company in California that presses flexi discs (and you should have seen his eyes shining) for him. The first part of this short round up reviews three singles, the second one his latest CD. 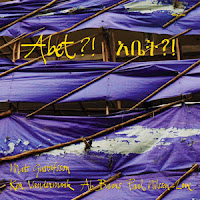 “Abet ?!” is a split 7’’ starting with a four-minute live killer track by Double Tandem (Ken Vandermark and Ab Baars on saxes, Paal Nilssen-Love on drums) that makes the audience in Addis Abeba freak out (the tracks were recorded during the “saxophone project” of The Ex in Ethiopia in 2009). Nilssen-Love starts the track going mad from the very first second before Baars and Vandermark drop in. This is old-fashioned free jazz at its best. Unlike their two complete albums there is no swing element here, the three keep pushing each other relentlessly before they literally choke the track off. Highly energetic!

The flipside presents Gustafsson on solo baritone sax in front of an enthusiastic Ethiopian audience two years later. It seems as if he is trying to take on African influences at the beginning, it is a very soulful and bluesy track that changes over to rhythmic extended techniques before it fades out in a very Gustafsson-ish way. 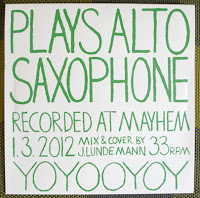 This is Mats Gustafsson’s second collaboration with John Lunds (after “Plays Baritone Saxophone” in 2011). Compared to his recent cooperation with Colin Stetson the two tracks on this 7-inch are rawer and more abrasive, they rather remind me of a quotation of Gustafsson’s colleague Peter Brötzmann, who claims that free jazz is always about fighting and about creating some space where you can present your ideas. While the A-side is a straight punch into your face, the flipside is a bit more playful. 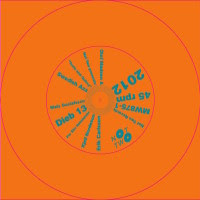 Swedish Azz’s two minute track obviously is a hip tribute to Toots Thielemans and Quincy Jones and it especially presents Gustafsson (sax), Per-Ake Holmlander (tuba), Kjell Nordeson (vibes) and Eric Carlsson (dr) paying tribute to the golden age of American west coast jazz (including some scratching and cracking on the flexi). Hardly ever have you heard Gustafsson playing in such a classical cool way. But as usual the presence of Dieb 13 (electronics) warps the whole track adding some special European distorted element. A nice little finger exercise stimulating the appetite for their complete albums. 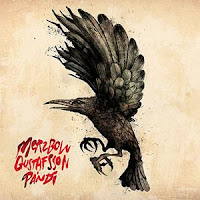 “Cuts” features Merzbow (a.k.a. Masami Akita) on electronics, Gustafsson on baritone sax, c-clarinet and live electronics, and Hungarian drummer Balász Pándi. When I heard about this line-up I was really excited because it reminded me of another recent collaboration between Gustafsson and Masami Akita – “One Bird Two Bird” (with Jim O’Rourke) - and “Live at the South Bank” (with Kieren Hebden and Steve Reid), both outstanding albums.

Actually I am really glad that this is a Gustafsson album that does not kill me immediately like his previous ones (and that it gives me the chance to avoid the impression that I have lost a critical attitude towards his music). In the first part of this session (which lasts more than 70 minutes) Gustafsson concentrates on electronic sounds; saxophone and clarinet are almost drowned in noise. It is a tough listening experience, as if you were in the middle of an arctic blizzard combined with an electrical storm in which you have already lost orientation. Some sounds are so shrill that you might be afraid of losing your sense of hearing (this is a serious warning). On “The Fear too. Invisible” and “Like Me. Like You” and the 20-minute-hellhound  “Like Razorblades in the Dark”, which make up the second part of the CD, Gustafsson’s saxophone is more present pushing the music towards classical noise-free-jazz – solid, hard, grabbing you by the scruff of your neck.

The titles of this album are inspired by the Swedish writer, visual artist and composer Leif Elggren’s performance “Something like seeing in the Dark” which Elggren and his collaborator John Duncan regarded as an attempt to enlarge sensorial limits in which the participants and the audience were used as test persons. This works for “Cuts” as well, it is a borderline experience.

Gustafsson sells the singles at his concerts but you can get them via catalyticsound.com, a website which promotes stuff by Gustafsson, Ken Vandermark, Peter Brötzmann and Paal-Nilssen-Love.