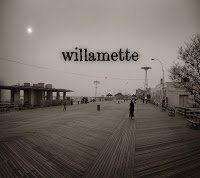 If the tenor saxophone seemed custom-made for rock 'n' roll, then Dana Colley, Mats Gustafsson and now Matt Rippetoe, seem hell-bent on proving that the baritone was specially designed for its harder, meaner, darker kid brother - heavy metal. Taking note of Bob Dylan's famous "play it f-ing loud", Willamette crank up the volume, thrash the guitars and beat the drums senseless. Holding down, at various points, both lead-line and riffing duties, Rippetoe cuts his way through the middle. His raspy tone sounding at times like Gustafsson, he captures the blood-and-guts vocal low-end of bands like Husker Dü and (Henry) Rollins-era Black Flag.

Although there are similarities to Swedish über-trio The Thing, this isn't jazz, the solos for the most part clinging firmly to the rock tradition - but then, being so heavily sax-lead, it isn't heavy rock either. But the fact that it seems caught in the no man's land between the two isn't a bad thing - the path it takes means its different without being difficult and danceable without being drivel. Try out their samples on the Bandcamp  release page or the version of 'Mr Smith' on YouTube here below, let your head start banging and then decide - metal jazz, is it the new New Thing?