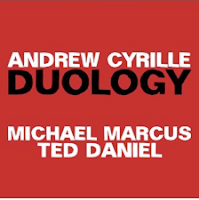 Duology = Michael Marcus (clarinet) and Ted Daniel (trumpet, flugelhorn).  And Duology = the new album from the pair with master drummer Andrew Cyrille.  They're an interesting group, as the musicians are all seasoned players whose abilities as support players are superb.  A really open-ended approach to the playing field makes the possibilities seem innumerable with musicians of this calibre; and you may keep your hopes up because these guys came to ball.

The opening melody line of “Vigilance” immediately made me miss the bass line.  Early Ornette & Cherry are easily detected as influences and maybe that's the reason why. (You are conditioned to hearing Haden's part underneath, even when the drums lay out.) Daniel takes a solo about a minute in, sounding pretty mu-like. Halfway through the track, Marcus takes the lead and spends his spotlight time thumbing through the surplus of ideas he has running around in his head. Not cohesive in any way, but completely fascinating. Then he and Daniel wind improvised lines around each other for a minute before returning to the head.

By the time you enter the world of “Zight Pulse,” it becomes apparent that Ornette and Cherry are going to be the reference point for Marcus and Daniel – and that Cyrille's approach, including the sound of the high-pitched and barely muted ride tom, is going to lean a bit toward Ed Blackwell on this date. It makes sense. Both Blackwell and Cyrille are careful, thoughtful, subtle and very natural players. Neither man is fussy, flashy, or overly aggressive, which are all too often the hallmarks of the free jazz drummer. Or at least the stereotype.

Cyrille gets his first extended solo during “Eclectic Autumns” and stays anchored to the rhythm of the track, but in a very exploratory fashion. His playing throughout swings with accents in surprising places. One great idea after another rolls out of Marcus' horn, this time in a way that is so artistically, aesthetically, mathematically sound that I suddenly realize he was jerking my chain during “Vigilance”. The first time through, I had to go back and listen to that track again right away just to be sure.
The album's longest cut, “Tripartite (Body, Soul and Spirit),” is appropriately divided into 3 sections – but Marcus sits this one out. Daniel blows some tub farts while Cyrille's gut pounding steadily churns, representing the Body section fairly well. The less, uh, earthy sections of the track are (more) beautiful; and there's a direct Ornette quote on this one, in case you weren't aware of his influence on all of this yet. But really, it's a testament to Daniel that it doesn't feel anything less than perfectly natural & heartfelt. In lesser hands, this could have been disastrously cloying.

“Epicycles” is perfectly titled. Loopy spirals from all players that weave around each other with careful precision. As great as the chemistry is between these amazing musicians, and as airy as the music feels without the sonic anchor of a bassist, I still find myself missing the sound of that instrument. Sometimes, as on this track, I actually find myself mentally writing the bass line. Any bassists looking for a creative outlet could do far worse than playing along with this disc.

Now! I was fearing this wonderful album from my friend Michael would pass unnoticed everywhere... Duology has two other albums out, check them!