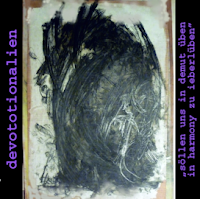 Sometimes you sign up for a review under false assumptions. Here I was attracted by the label (like NoBusiness and Clean Feed the Polish Not Two label usually guarantees great music) and the obviously Yiddish title of the album (which roughly means “we should try humbly to survive in harmony”). I thought it might be music like Martin Küchen’s Hellstorm or Ned Rothenberg’s World of Odd Harmonics, music that deals with the Jewish heritage in Europe, sad and lamenting, but full of self-confidence, though.

And the album even starts like that, with an agonized soprano and a piano which is played in the interior. But after 35 seconds the drums immediately make it clear that this is not the way the music is going, this is gonna be straight and classic free jazz.

Devototionalien is a malapropism of the German word “Devotionalien” (meaning devotional objects), the band is Eric Zinman (piano, euphonium), who studied with Bill Dixon, George Russell and Jimmy Giuffre,  and Austrian veterans Kilian Schrader (electric bass, sfx effects), Mario Rechtern (sopranino, alto and baritone saxophone, flute) and Johannes Krebs (drums).  The quartet is obviously devoted (another pun as to the band’s name) to the tradition of the great European quartets and trios like the ones led by Alexander von Schlippenbach or Brötzmann/Van Hove/Bennink.

Especially Zinman’s piano is very Schlippenbach-like, like him he uses the interior of the piano quite frequently, he pushes the band with wild piano clusters and in combination with the highly energetic drums they almost take the small audience’s breath away, something particularly discernible in “Track Nr.1”, in which the quartet is immediately at full speed after a very brief warming up. Mario Rechtern’s sax is deeply rooted in the European tradition as well, his style is heavily based on Brötzmann, for example, it is very expressive with a lot of outbreaks. There is hardly any break, no relief, he is hard and concentrated and sounds as angry as a 20-year-old (although he is born in 1942). Only in “Track Nr. 2” the band let go a little, there is more subtlety and more lyricism, before “Track Nr. 3” picks up the speed again.

This is nothing you haven’t heard yet, it is not the reinvention of the wheel - but it is plain and simple free jazz played by fine musicians on a top level.

Hmmm, so it doesn't meet the reviewers preconceptions (which seem rather foundation-less), so it gets damned with faint praise and the dreaded 3 stars. Maybe it deserves it, I'll know after I buy it! From what I can discern from the review, this ought to be a fun listen.

Yep, AGM, it didn't meet my preconceptions. You might call them foundation-less but on the other hand it is their first album and I had no other information than the title when I enlisted for it. But the point that the album didn't meet my preconceptions didn't influence my review, I just used it as an introduction. The album itself is a nice surprise and I consider three and a half stars as an absolutely good rating, actually I was between three and a half and four stars. I wouldn't call it faint praise either and I surely didn't want to damn the album at all. Please give it a try, I am pretty sure the album does not disappoint you.

Good point AGM - the value of the stars is that helps to quickly frame the reviewer's argument, which is something that should be questioned by the reader. There is a guideline that is posted on the left column of the blog regarding how ratings are developed, but, it is still the reviewer's point of view. There are plenty of albums that have less than 4 stars that I personally would have given more to, but that's my own opinion as a listener. More importantly, happy listening, and I agree, it does sound like an enjoyable album.