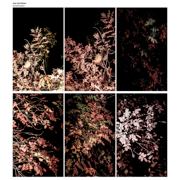 by Paolo Casertano and Martin Schray

First there are the plain facts: Solidification is a marvelous box consisting of seven LPs including Arve Henriksen’s Rune Grammofon albums Sakuteiki, Chiaroscuro and Strjon, all of them with bonus tracks (all in all 8 songs), and as the icing on the cake it features a new album called Chron, his first since his ECM album Cartography. Kim Hiorthøy´s design is luxurious and affectionate and the superb 24 page booklet includes extensive informative liner notes by Fiona Talkington and John Kelman. The first three albums are presented on three double LPs on black vinyl, while Chron is pressed on white vinyl. The package also includes two DVDs with all the total 56 tracks as 16/44 files, hi-res FLAC files and original master quality 24/44 or 24/96 files. A good compromise and incentive both for collectors and for geek audiophiles.

Henriksen, who is now 47, has been a very prolific and versatile musician since the early nineties, including cooperations as different as those with Nils Petter Molvær, Marilyn Crispell, Motorpsycho, Christian Wallumrød or David Sylvian (only for ECM he has contributed to almost 30 albums) gathering international recognition but also harsh critiques because of his sound: when Stef reviewed Strjon he said that he liked the “immense sadness of this music” and “the sounds he manages to get out of his instrument”. On the other hand he said it was somehow not his cup of tea either. Less well-meaning statements called his music pussyfooting and world music crap. But besides this melancholic approach there were also his albums with Supersilent and Deathprod, productions that for sure don’t concede much to the easy-listening wide hotchpotch.

In any case, one of the most impressive aspects of his career is, as a matter of fact, the capacity to create a unique and recognizable style in four solo albums. You may appreciate it or not, but really likely, after you have listened to him just once, you are going to recognize his sound and approach immediately since then, exactly as you would recognize a Quentin Tarantino or a Wes Anderson movie after just a couple of screenshots. His cavernous, drawling, reverberated tone, the insertion - alongside the main line of his instrument - of his neuter - sort of “voce bianca” - singing that enhances the temporal dilation of the compositions and the listener’s estrangement towards their deployment.
Because of that it is hard to talk about compositional development in Henriksen’s works. They are basically the results of little sounds sketches (Sakuteiki is certainly the most representative example of this) in contradiction to acoustic non-events where the attention of the listener is grabbed more from the texture of the sound than from his shape. The musician achieves this focusing unconventionally on the empty spaces inside the pipes of trumpet. From time to time the instrument sounds almost like a flute, or like a didgeridoo, or like a totally new and unknown brass or woodwind. For Henriksen the air, the noise, the breath staying inside it, touching and melting with all the inner metal surfaces of the trumpet seem to be more important than the sound pouring out from the bell itself. He often plays without the mouthpiece, strengthening the idea and the listener’s feeling of his “epidermic being inside the trumpet”. The other fundamental factor in Henriksen’s music is the almost unnatural background silence where his musical presence takes place - once again the objectification of the oriental (and for extension and derivation also Cagean) conception of the juxtaposition of polar opposites. The sound of the trumpet always seems to be a foreign body as in the musical context where it belongs (the other sounds and instruments) as well as in the surrounding “acoustic environment” that necessarily include silence. But the trumpet doesn’t seek for integration, its otherness also being its ultimate substantiation.

No matter if you like his approach (and we do), Solidification is an artist’s work in progress from Sakuteiki in 2001 to Chron in 2012. Trying to avoid sounding like another Miles Davis epigone and presenting his albums much like in form of a voyage around the world Sakuteiki starts in Asia with its strong influence of Japanese melodies and harmonies. It is an album referring to a handbook from the 11th century about gardening. Tracks like “Inside Tea-House”, “Tsukubai – Washbasin” or “Paths around the Pond” are like pictures come to life presenting Henriksen as a landscape architect with a very distinguished meditative, lyrical and intimate sound, or as a haiku where the musician just sets the trestle of the composition asking for the imaginative and active participation of the listener to fill and complete the musical structure.  The album is recorded by Helge Sten and already displays Henriksen’s liking for special places like the Emanuel Vigeland Mausoleum (Stian Westerhus has recorded his album The Matriarch and the Wrong Kind of Flowers there as well).

For his sophomore album Chiaroscuro he worked with Jan Bang and Audun Kleive and his voyage took him to Italy. The name of the album hints to the use of strong contrasts between light and dark affecting the complete work of art. Henriksen transfers the shadow-and-light-contouring to his compositions and sound - especially with the help of Bang’s live sampling and Kleive’s percussion but mostly by the growing use of his own exceptional falsetto. As to color and structure the album is a fascinating mixture of Henryk Gòrecki’s Sinfonia Nr. 3, Ryuichi Sakamoto’s soundtrack for “Merry Christmas Mr. Lawrence” and Bill Dixon.

Here the intensification of Henriksen’s interest in drums and percussion is evident, that will bring him subsequently to perform also as a drummer in the most recent Supersilent line up.

Also, the technological enhancement and augmentation of his sound through sampling, looping, overdubbing and many other forms of real-time sound treatment (thanks also to the great work of Jan Bang, weaving with Henriksen an all new and unpredictable technologic interplay - if you have the chance do not miss what he can do sampling the voice of Henriksen during a live performance and directly challenging the trumpeter on the stage with it. This clearly implies a new aspect of improvisation and gives birth to many questions: the trumpet player improvises reacting to his own musical elements played by someone that is not him, and the other musician does the same answering with elements that are not properly his own) has definitely grown across the years, but Henriksen seems to be more interested in the possibility of building multi-layered soundscapes than in the alteration of his own tone, though.

Drums and percussion, anyway clearly ethnic and folk (whatever this means), gaining a nodal role in this album are probably to be seen also as the elements that explain the tendency of some critics to encapsulate Henriksen under the world music etiquette.

On Strjon, his third album here, his voyage takes him back to his childhood town of Strjon, a place in west Norway located at a fjord. His sound has evolved and changed again since he has recruited his old Supersilent combatants Ståle Storløkken and Helge Sten in order to play duets with them on this album, but most of all because Norway’s nature is the big topic for the first time. Henriksen had to travel around the world to find his identity which is deeply rooted in the glaciers, snow-topped mountains and the green-blue water of the fjords. This could sound really cheesy but Henriksen is too much a clever and sensitive musician to avoid such traps. Longer tracks like the creepy and chopped “Black Mountain”, “Green Water” with its dissonant keyboard chords and “Glacier Descent” with its broken ethereal sound layers are of a dark beauty insinuating that nature and home are not only idyllic places but something which has to be fought with constantly.

With Chron Henriksen’s journey leaves the earth’s surface and continues within the earth. Now there are tracks called “Proto Earth”, “Magma Oscillator” or “Plate Tectonic” and Henriksen is back to a pure solo album on which he claims that he has recorded the tracks at home and in hotels, airports, planes railway stations and backstage. The result is the rawest, most fragmented of all his albums, on the first three tracks there is not even a trumpet. Henriksen goes back to his musical roots with Supersilent as if he wants to destroy his musical image relentlessly, it is a journey of further exploration again.

But there is one aspect we have to mention for the audiophiles out there: the music is wonderful in its gorgeousness, it is simply splendid in its melancholic accessibility. It is a five-star-box as to art. For some of you there might be a serious drawback, however. When you listen to the vinyl over the headphones the trebles are sometimes distorted, especially in the high registers where they should be clearer and crispier (as they are on the files). It is not as obvious when you listen to it over the speakers. This might be due to the fact that some registers simply unravel on vinyl, while files are zipped. We don’t mind, but maybe it is useful information for some of you. And a further proof that the musical world of Henriksen - ancient, new and timeless at the same time, ethnically and geographically contaminated even though powerfully individual and rooted in his land atmospheres, minimal and alienating as much as overwhelmingly lyrical - is made of contrasts and dichotomies also in its physical outputs.

Marvellous collection by a marvellous artist. I've been enjoying this for some time. A real treat