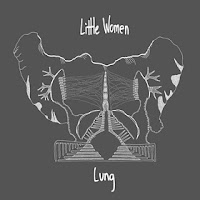 While browsing around the AUM Fidelity website looking for some insight into the latest Little Women's recording,'Lung', I discovered a few interesting facts or, I guess, selling points. It is mentioned that this album would not have a vinyl counterpart due to a creative decision to not break up the single 42 minute track that is the entirety of 'Lung'. It goes on to mention that 'Lung' was recorded in one complete take and was designed to be listened to as such. Now, there are plenty of jazz albums that are just one take, but AUM Fidelity really takes the time to reinforce this point.

So..... I sit, inhale deeply into my lungs and press play.

The air that goes into your lungs is for you, the air that comes back out is for others. It can pass over vocal chords to form words like 'I'm sorry', or 'Please help', or 'I love you'. It can be used to produce a sigh or an audible exhale which is how 'Lung' begins. It starts with nothing and slowly evolves into breathing; air in, air out until Jason Nazary (drums) rattles his cymbals, kick starting what is to become a 42 minute meditation/ propellant/ epic/ peace keeper/ anarchist.

It can be used to sing a G in unison with each voice alternately dropping out to breathe while maintaining the note. This is a very memorable moment as you can hear the frailty in their voices, a gutsy choice indeed but one that, even though very short, bridges a gap between musical movements beautifully.

The air out also passes over the reeds of both Darius Jones (alto) and Travis Laplante (tenor). Throughout the track, the force of the expelled air dances between subtle and introspective to violent and confrontational with an occasional siren but also a good helping of conversation between the two saxophonists. One of my favorite things about Jones is how comfortable he is in the undefined spaces between notes but here he clearly demonstrates his comfort in the composed and being composed.
Andrew Smiley (guitar) chooses his moments very carefully, knowing how the slightest motion could change everyone's direction, especially in the absence of a bass. But when he does strike, the air that is pushed from the cone in his amp is strong enough to take your breath away.

I now totally understand the need to listen to this track in one sitting and more importantly in its entirety. It tells a story, a tale, a fable if you will, and as much as i am only describing segments, it really does meld together into one complete piece. It will soothe you and jolt you awake. It will have you on the edge of your seat holding your breath.

Can be purchased from instantjazz.com

This is a very nice review of a great album, Philip, I was just listening to it and can confirm everything you say about it. I especially like the guitar breaks which are almost heavy metal to me but then they are so sparse and well chosen that they really structure the track. It's a great listening challenge and a candidate for this year's Happy New Ears list.

Thanks Martin. Always good to hear other's opinions on the music and the writing. As always, I look forward to your next review. They constantly inspire me to listen.

Guess I'll have to give this one another listen then. Played it a few times in the last month but found it hard to get into, even got a bit annoyed by it. We'll see how it evolves bearing this review in mind.