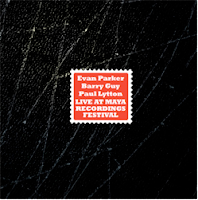 As a musician Evan Parker is a man of many faces. On the one hand he is always looking for new collaborations like on C-Section with electronic madman John Wiese (Second Layer Recordings), Live at Akbank Jazz Festival (Re:konstruKkt) with the Turkish group konstruKt or ‘Round About One O’clock (Not Two) with Slovenian drummer and percussionist Zlatko Kaučič. On the other hand he likes long time relations like his Electro-Acoustic Ensemble (although many new members have been added to this project), the legendary Schlippenbach Trio (as to persistence the Rolling Stones of free jazz) and the Evan Parker Trio (with Barry Guy on bass and Paul Lytton on drums).

Albeit the work of this trio is pretty well documented (their first album was Tracks in 1983), there haven’t been many albums in the last 15 years (just Nightwork/Marge, Zafiro/Maya, 2x3=5/Leo) - if you don’t count the albums when the band was augmented by guest musicians like Peter Evans or Marilyn Crispell. And now almost simultaneously there are the contributions to Barry Guy New Orchestra Small Formations: Mad Dogs and this one here.

And Live at Maya Recordings Festival presents the trio at its best. Especially when the whole trio is in action the building up of sound layers is of a rare intensity, a “thickly textured woven soundscape, which is constantly adding and subtracting, re-designing itself and pushing the sound through new possibilities and decisions”, as Steve Day describes it in his book “Two Full Ears”. It is music from the bottom of a Poe-ish maelstrom pretending it is perfect surfing weather. Their secret is that they are a well-greased machine, an improvising entity, a true trio – with a drummer that stirs the shit, a bass that provides an irresistible pulse (plus some extra surprises) and a saxophonist who does not use this context for selfish solos but for tight and spontaneous interaction looking for new pastures.

The best example is the last track on the album. “Scoria” starts with an intimate Guy/Lytton conference, there is an almost evil pizzicato drone by Guy, a climactic strumming supported by Lytton’s cascade of cymbal rolls before Parker’s approximates rather hesitantly to the figure of the duo before he jumps on the train with his typical circular breathing. What makes up the beauty of the piece is the contrast between the dark atmosphere created by Guy and Lytton and the twinkling sea-spray of Parker’s tenor at the end – an undertow you could addict yourself to forever … and ever … and ever.
The album was recorded during a concert at the Maya Recordings Festival in September, 2011 at Theater am Gleis, in Winterthur, Switzerland

The album is available on double vinyl as a limited edition of 500 and on CD as well.

Finally, get an impression of the trio here: