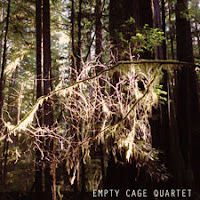 The imagery of an empty cage. Unless you are looking at a new one in a pet store, there was once something alive in there. A bird perhaps, maybe a large cat, or a chimpanzee to pick something a little closer to home. Of course, there is always a positive, more uplifting way of looking at it. Was there a jailbreak, a run to freedom leaving an antiquated symbol of repression? These were just some of the thoughts running through my head as the 'Empty Cage Quartet' were running after them.

This recording celebrates their tenth year as a group and all their years together realizes itself in various incarnations of telekinesis.  Little did I know the ride I was in for.

This is thoughtful music, thought out music, and ultimately realized music.  The recording begins with promise, ('Oblige the Oblivious') a promise of a happy, albeit slightly off putting soul quite happy to be singing in a cage. Oh, the sweet sounds of when you think you are correct. The soul soon leaves the tenant ('Peace') and begins what can only be described as a downward descent until it nearly reaches rock bottom ('Taming Power of the Great').

This quartet feels right and even better for the listener if the album can be listened to in one sitting, (multiple times if the ability is there to do so) and is brought to you with skill and precision by Kris Tiner (trumpet), Jason Mears ( reeds), Paul Kikuchi (percussion) and Ivan Johnson (bass).

'Joyous Lake' haunts as it takes a 9 minute introspective look through the bars of the cage where claws or paws or fingers once held. It is at times as stark as the album's artwork. It begins with a flutter of sound searching for a footing. Horns ring out. An emotional bowing of the bass and a tentative tap on the drum kit set up the final fall until the tension breaks and leads the listener into 'Avoid the Obvious' thus bringing the album full circle by revisiting some of the themes and sensibilities of the recording's opener.

Even though split up into tracks, this recording works as a single piece of composed and free music, both suspenseful and uplifting, both creative and destructive. You may even feel a little better than you did at the beginning of the record, I did.

Can be purchased from their Bandcamp page.