Last year we reviewed the fist volume of Eddie Prévost's "Meeting With Remarkable Saxophonists", called "All Told", with Evan Parker on sax and John Edwards on bass. We never highlighted the other two albums in the series : "All But", with John Butcher and Guillaume Viltard and "All Together" with Jason Yarde on sax and Oli Hayhurst on bass. All performances were recorded at the Network Theatre in London between May and August 2011. 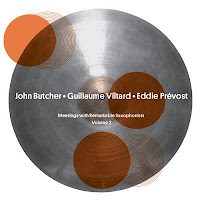 If it is difficult to match Evan Parker, you can rely on John Butcher to come to the same high level. Butcher shows his incredible skills on the instrument by sucking and slapping and blowing his instrument full of nervous tension, sounding like lusty blackbirds, whispering phantoms or raucous tantrums, as you see fit to describe it, but always as one with the trio, and offering great space and ideas for Prévost's skillful play of emphasis and pulse. Viltard, bassist with the London Improvisers Orchestra is good but less prominent, and at moments totally eclipsed by the fury of sax and drums. If you like Butcher, and you like Prévost, I can only recommend the album. 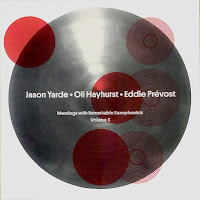 The real discovery is Jason Yarde, and to come in a series after Evan Parker and John Butcher says enough about the esteem Prévost has for the young musician. The quality is obvious. He can shout and scream full of relentless energy, exploring new sonic environments and alternating with very lyrical and calm passages, with phrases and rhythms that are real jazzy, and as part of a trio that moves as one. Hayhurst is good and quite jazzy too, quoting Charlie Haden in one of his solo moments ... and Prévost?  .... well he is Prévost ... all creative all present all in function of the music. The album consists of two lengthy improvisations, one of twenty-six minutes, the other almost twice as long, but which is captivating from beginning to end. A real treat.

"All But" was, in fact, reviewed last October:

Thanks Colin, I thought so ... I had been looking for it but without actually finding it. You see, too many albums ...
stef