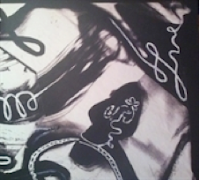 Berlin in a not too distant future after the musical revolution:

Three months ago Justin Bieber was arrested at the Russian border where he was trying to ask for musical exile – he was on the run. American Idol has been banned from television for good, the whereabouts of former stars like Rihanna, Lady Gaga, Katy Perry and many others are unknown. A young angry audience was fed up with their music and sent them packing. The latest, coolest and hippest thing is improvised music, preferably free jazz. New clubs and record stores spring up like mushrooms. 20-year-olds are ready to spend a fortune for original vinyl albums by Bill Dixon, David S. Ware, Supersilent or Last Exit.

In front of a new club called “La Brötz” with an adjacent record store three young people -  Oscar, Karl and Enna - are fumbling at their Apple glasses. You can hear only pieces of the conversation: “Yes, they are supposed to have super rare stuff…” – “Bill Dixon’s Edizioni Ferrari” – “AMM’s Ammmusic on Elektra …” – “I hope it’s not too late” - “… maybe it’s just a rumour”.

At 10 a.m. Elias, the shop owner, opens the doors. He is a man in his thirties who looks like a young Allen Ginsberg. The youngsters overwhelm him with questions. “Yes,” he answers, “there are some new LPs from an old lady who has cleaned out her late husband’s record collection. You find them here.” He points at two heavy wooden boxes in front of the counter. The young people ignore Elias now, they feel completely at ease and check out the stuff. The albums are in an excellent condition, the man must have been a connoisseur. Dixon’s and AMM’s album are not there but they find some rare FMP and RuneGrammofon LPs. Then Karl suddenly sees an LP on a board behind Elias. “What’s this?” he asks Elias, pointing at the cover. “It’s a trio LP with Joe McPhee on sax, Sonic Youth’s Thurston Moore and Bill Nace of Body/Heat fame on guitars, it’s called Last Notes. You can sometimes find the first part of the session on the video channels on the internet, but the vinyl is super rare, they only printed 250 copies then, but ….” “I heard about it, I don’t even know someone who knows someone who owns this record”, says Enna.  “What’s the music like?” asks Oscar. “It’s not like the noise tornado you might expect, well … maybe the flipside, but the A-side is actually magical, majestic, both meditative and adventurous music. Totally beautiful! Moore and Nace build up huge guitar feedback and sound walls while McPhee makes use of his magnificent tone. Imagine you listen to Sonic Youth’s outro cacophonies around 1990 with John Coltrane as a guest star. This might come close to it. It was recorded live at Roulette in NYC in 2012, but you must know something …” - “How much do you want for it?” asks Enna. “It’s not mine, that’s what I wanted to tell you. The old men in the café across the street, it’s theirs. I know the oldest one, he is in his eighties now. His name is Martin Schray. He and his friends Paolo Casertano, Paul Acquaro and Stef Gijssels, these are the others, they wrote for a free jazz blog Gijssels started. But that was a long time ago. Maybe you can ask them …”

Back to the present:

There is an edition of only 250 vinyl copies and as you can imagine the album was immediately sold out at the source but there are some copies left on the web. So you better be quick, it is great music.

Watch the end of the album here:

At the table in the café, the four men are sipping on their drinks and friendly talking.
“Thanks God they have invented the jazzyfing device” says Paul moving a star shaped little box above a copy of “PSY – The Very Best of Gangnam Style Ultimate Edition”.
“True, my friend!” nods Paolo “that’s as important as the vinylificator!”.
“No way!” replies then Martin “the best invention of the last decade is definitely the Gustafssonizer!”
“Come on guys! Don’t be that old fashioned” adds Stef “I had an ocular injection of liquid jazz chords this morning, and I must say it’s fantastic”.
The Blog is in the air, floating just all around them.

Martin, my prediction was correct: you're now reviewing albums of such rarity that they've already sold out! :-)

Colin,there were at least two copies on the net, when I was writing the review. I guess that Paolo might have grabbed one :-). If one turns up, be quick. But I promise to review regular stuff next. I really will. ;-).

Paolo, what a nice coda.

And I think I've just got the other one! Off to watch the FA cup final.

Unbelievable, Colin. Wigan really made it.

It's funny how otherwise intelligent and reasonable men change character completely when it comes to football. It reminds me of the saying that in Italy, a man's response to any question is "depende" - accompanied by a shake of the hand - except when it concerns his mother, or football team!

Great story/review Martin. Shame the music itself has vanished into the air though (how does that Eric Dolphy quote go?).

Colin, I'm Italian but I've never heard this saying before. This must be the funny part of globalisation. I'm sure I could tell you so many English sayings that you would hardly understand...

Paolo, I read it in (I think, but I can’t be sure): “La Bella Figura – An Insider’s Guide to the Italian Mind” by Beppe Severgnini”, a columnist with Corriere della Sera. If not him, then in a book by another of your compatriots. I admire that ironic, self-deprecating, Italian humour, which I can see you share.

Colin, I must admit I don't like that much Beppe Severgnini. What matters is that really more likely we both belong to the same musical nation.