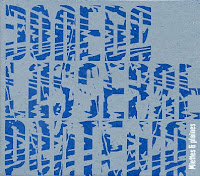 On Miettes & Plaines, a French wine cellar is suffused with Doneda’s considered sax and the slowly seeping percussion of Lasserre and Pontevia. Lasserre sticks to a pared-down kit, working mostly with cymbals, choosing extended washes of sound over short, shrill attacks. Pontevia is a subtle, moody presence, filling the gaps as the cloud raised by Doneda and Lasserre spreads to the furthest corners of the room. There’s a keen awareness here of how even the smallest sounds react in the space, and the result is an intelligent, ethereal improvisation that fully embodies the secreted, subterranean imagery evoked by playing in a cellar, the warm and dark fertile ground beneath the brighter, open spaces of the world. An intimate recording of what must have been an amazing concert. 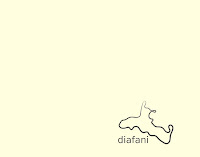 Decay is an hour of just that: decaying piano notes, struck in different methods and with varying intensity and then allowed to ring fully and expire. If it sounds tedious already, you may want to skip this recording, but the result can actually be quite fascinating. Any one piano string is surrounded by a multitude of others, and the timbres and sonorities produced during the full life of a note can be surprising and complex. This is especially true for the long stretches in which these notes are rung out at intervals over a quiet, droning organ tone.

The problems arise when the organ stops—there then seems to be some sort of post-production, “absolute” silence inserted between the decaying notes, something that unfortunately destroys the continuity of the entire piece. As can be imagined, volume is important to getting the full effect of each decaying note, but it also means that you pick up the faint environmental sounds that were present during recording. There’s a slight grain to the recording that represents the “silence” of the reality that it captured, a silence that is abruptly halted by the total, artificial soundlessness of the silences that were inserted. The grainy character returns as each note rings out, only to be cut-off again once the note has died away. Yes, it’s a subtle effect, but your ears can’t help but hone in each time one silence smothers the other. A niggling complaint perhaps, but one that is magnified greatly in the delicate atmosphere of the piece. 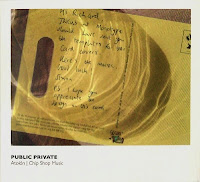 You could call this collaboration of  improvising groups “lowercase raising its voice”—not anything written in capital letters necessarily, but maybe conveyed in a larger font size. You can feel in it the stirrings of a predicament Paul Vogel (one of Chip Shop’s reedsmen) articulates in an interview on Another Timbre’s website: that the quiet, spacious approach of a lot of current improvisation is becoming as restrictive and “safe” as the loud, busy forms of improvisation it was originally a retreat from. Public Private may be an attempt to forge yet a new path, but the result is closer to a compromise.

The stated purpose is an odd one: that two groups with similar sounds and approaches should get together and play, not as one ensemble, but as two distinct entities pitted against one another, trying to be influenced as little as possible by each other. Perhaps only the second track, “Private,” truly achieves this, being as it is two separate recordings of each group that were later combined in the studio. The longer “Public” track fortunately allows the listener to encounter the two groups actually playing together. For those that enjoy this sort of droney, spread-out music, Public Private is an excellent addition to the canon. 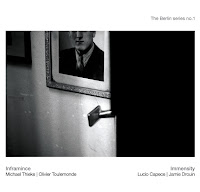 Inframince & Immensity is the first disc in a series designed to highlight the large Berlin improv scene. It features a pair of clarinetists (Thieke and Capece) performing in duos with players from two very different worlds: Toulemonde improvises only with non-amplified, everyday objects, while Drouin plays an analog synthesizer. The resulting tracks are surprisingly similar, however, the product of what appear to be closely aligned improvisational philosophies. “Inframince” can be grating at times, being largely the product of friction. But Toulemonde is in impressive form; some sounds it is difficult to imagine an object for.

In “Immensity,” Capece can be hard to distinguish from the synthesizer. He has a whole bag of tricks and preparations designed to alter the same parameters of sound the synth is built to manipulate.  At times I can’t help but wonder if the titles are mixed up, though. The conceptually tight playing of Capece and Drouin more fully evokes Duchamp, feeling like the magnification of the imperceptible differences in a field of  seemingly static sound. Thieke and Toulemonde, on the other hand, conjure something large and imposing from a limited palette of objects and technique. Whatever you want to call them, two impressive improvisations.