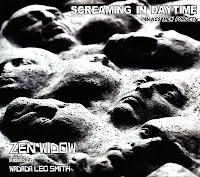 For those who don't know Zen Widow, the trio is worth mentioning for its previous recordings too. The trio consists of Gianni Gebbia on sax, Matthew Goodheart on piano and Garth Powell on drums. Their debut album brought seventeen pieces of short ideas and more elaborate developments, all pretty abstract sketches and adventurous sound creations, a little crazy at times, yet quite coherent overall.

Their second album, "Quodlibet", was even better, more accessible, more melodious, "drawing on a wealth of material that ranges from Soviet era cabaret tunes to Gene Pitney classics to 17th Century Italian opera arias", and using these as inspiration to work from, not as separate tunes, but within the same piece. The result is interesting and beautiful at the same time.

On their third album, with the frightening title "Screaming In Daytime", the same concept is used, but then with material coming from tenor saxophonist Glenn Spearman. As the liner notes say "Wishing to maintain the essence of Glenn's rich compositional style was the priority, without resorting to a typical tribute collection of an artist's past works".

... yet now the trio is expanded with no one less than Wadada Leo Smith on trumpet. Goodheart already played with Smith before, including on the highly recommendable duo album "Interludes Of Breath And Substance" (1998).

This album starts with a powerful and typical horn phrase by Smith, an incantation and wake-up call at the same time, full of contemplative calm and spiritual yearning. Then Powel joins on light percussion with strong pulse, a great introduction for the rest of the music to come. Halfway the track Gebbia joins for a few echoing phrases, as an invitation for the piano to join - replacing trumpet and drums and sax - and the mood shifts into one of only calm contemplation on keyboards, and when the sounds then completely dissolve into silence, the sax, solo again, picks up the tread, and Powell picks up a single-percussion rhythmic delight, with some small leftovers of trumpet and sound resurging before it all fades out.

It is all strange, pleasant, welcoming, open-ended, light-textured, with the artists taking turns in making the music, rather than simultaneously, in a slow, evolving unhurried relay of creative thoughts and shared sentiments. Musically, the album ranges from real "soundscape" mode in "This Seeming Dream" to the more jazzy long closing track, "Musa Physics", which is built around an actual theme and has more density and simultaneous interplay.

A strange and beautiful album.

Yet another one to buy!! Stef, I share your dedication to the work of WLS so thank you for highlighting yet another recording.
I'm very excited by the prospect of his new orchestra recording for TUM. No doubt you'll be reviewing that one.
Keep them coming