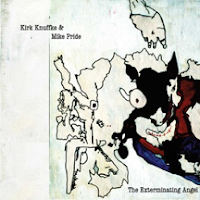 Don’t let the menacing title fool you: this isn’t a death-metal scare-fest, but rather a freely-improvised collaboration between two very busy musicians who are recorded here together for the first time.  Knuffke released a fine debut quartet record several years ago on Clean Feed (BigWig), and a follow-up trio disc also on that label (Amnesia Brown), not to mention a sizable number of collaborative projects with others.  Pride has a similarly extensive output, documented on Aum Fidelity as a leader in addition to his many other gigs in a supporting role.

Knuffke offers a terrific range of techniques on the cornet, as evident particularly on the third track, “Moritz,” which begins with Knuffke providing some relatively quiet and furtive phrases to introduce the track, followed by progressively involved and lengthier passages.  Pride starts with a thoughtful and sympathetic use of mallets on this cut, supporting Knuffke as he gradually escalates the dynamics and energy of the piece.  As the players develop their improvisation, Pride’s strong rhythmic foundation begins to emerge, prodding Knuffke to become even more adventurous and expansive in his phrases.  Then as Pride switches to brushes midway through the track, Knuffke once again becomes a bit more quiet and restrained, developing his ideas first more subtly while Pride offers graceful support, and then becoming once again more voluble and exuberant before gradually ending the track by working an infectious, jaunty little groove with Pride.

Aside from the brief second track, “Goldie,” which clocks in at just over two minutes, the other five cuts offer plenty of time for the musicians to stretch out and explore their ideas.  Pride brings a lot to the table in providing not only a good deal of expressive range as a percussionist, but also a strong sense of pulse that helps propel the improvisations forward.  Whether it’s limiting himself to occasional interjections or launching into more identifiable grooves, Pride does more than enough to sustain the duo’s improvisations.  And for his part, Knuffke doesn’t feel compelled to overwhelm the listener with a barrage of notes; he’s just as content to explore the sonority of his instrument and allow individual notes to linger and decay, as he does to fine effect on the first portion of “Exterminating Angel” before he decides to ramp things up and bring a bit more fire as the track closes.

If I had to offer a criticism of the record, it’s that at times I felt Knuffke was a little too-patient in developing his ideas.  While he should be commended for being willing to use space and silence in the articulation of his ideas, there were moments on the disc (particularly on the lengthier final track, “SuperDixon”) that seemed to wander a bit before becoming more fully defined.  But that quibble aside, there’s still a great deal of value here for fans of free improvisation who can appreciate the quieter, less boisterous side of the genre.