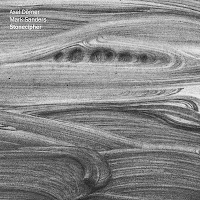 Trying to unpack Stonecipher feels as arcane as scrutinizing the lines in marble, or reading the fine constellation of flecks in a slab of granite. It’s an album that makes its transcendence and beauty obvious enough, but without revealing anything of why this should be so; faced with only the sounds, we have incomplete information about how it came to be, and therefore, like some mysteriously-veined marble obelisk, must accept it for what it is, towering before us.

We know that Stonecipher is the duo of Axel Dörner and Mark Sanders, working with trumpet, electronics, and percussion. Dörner has by now completely obscured his methodology, and it’s probably no longer accurate to call him a trumpet player. His concern over the years has steadily narrowed to the very being of sound itself, while his tools for exploring this have at the same time expanded. He deftly weds trumpet technique with live electronics, leaving the listener feeling sure of neither, aware only that they’ve entered a realm where causality and sound no longer have the comfortable relationship they’re used to.

An impressive variety of “distances” are conjured in Stonecipher, as though everything is arranged toward fostering the perception of certain depths of field. The long “Stonecipher I” is very unsettling, a shifting tangle of noise that wields its power by being unpredictable, like driving a dark wooded road, headlights barely cutting through the fog. In many respects, it more calls to mind Francisco López’s processed field recordings than the real-time improvising of two musicians. Sanders blends in the best way he can: with radiating cymbals and rolls of toms, blunting attacks and stretching out sounds to create an expanse as far-flung as Dörner’s.

“Stonecipher II” has some more obvious moments of trumpet playing, but there’s still so much electronic manipulation that it’s hard to even imagine at what points the mouthpiece might be touched to Dörner’s lips. In a way, one of the underlying truths to this album, and to a lot of improvisatory practices these days, is that it really doesn’t matter. Like reading the grains of a stone, isolating or identifying each speck of sand and sediment detracts from the bigger reality: that this thing before you, this work, is something far greater and so, so far removed from the processes and materials that created it. As John Dewey notes in Art as Experience, the art isn’t the object or the method, it’s what the result of those things “does with and in experience.” That’s fundamentally where Stonecipher operates: outside of players and instruments and fact sheets and back stories. Just the work, the art, suspending itself in the listener’s ken as something big and noteworthy and peculiar.

In short: music worth paying attention to.