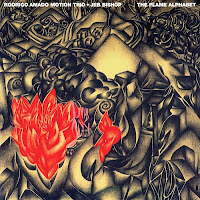 Rodrigo Amado's Searching for Adam (Clean Feed, 2010) was one of the most played albums on my iPod for about a year.  Rodrigo's sax duets with Taylor Ho Bynum (trumpet) rewarded repeated listenings and suited just about any environment.  I was much more familiar with Ho Bynum's work at the time, and I wasn't sure if he and Amado were a good match – but it sure was fascinating stuff – and obviously I couldn't get enough of it.  Which means it worked, of course.

When Amado was first heard with his current sparring partner, Jeb Bishop (trombone), earlier last year on the fiery Burning Live At Jazz Ao Centro disc, it sounded like a (sound) barrier had been broken.  That performance was a wild showcase that often threatened to spin completely out of control.  Naturally, its follow-up studio date, The Flame Alphabet, presents a thoughtful and often spacious approach to organizing chaos.  Like Ho Bynum before him, Bishop often seems at odds with Amado's playing, and the proceedings often sound like he and Amado are playing entirely different pieces of music at opposite ends of the room - the separation of Amado in one channel and Bishop in the other emphasizes this effect – and as before, this is precisely why it works.  Different roads, same destination.

The album opens with exactly this demonstration on “Burning Mountain,” as opaque lines played by Amado and Bishop spill from their parallel boxes.  Drummer Gabriel Ferrandini and cellist Miguel Mira, who plucks the strings throughout the entire record like a bassist, provide tentative support before all four lunge into the serious business of fanning the fire-music flames into the open sky.  Amado and Bishop continue shrieking in forked tongues until the blaze is gradually (and just barely) extinguished by the rhythm section.

When Bishop leads the group on the title track, it sounds like he's taking them down European side streets that should be too small for this giant vehicle to traverse.  By the time they've arrived at the other end to meet Amado, it's evening and the engine is ticking and knocking.  So they let it sit for the night, while everyone eats, drinks, converses, and eventually hits the sack.

The next morning (“First Light”), Bishop grabs the plunger, while Ferrandini grabs some clothes hangers and wire cutters, and together they fumble around in an attempt to fix the toilet.  Eventually they succeed and the day begins.  The coffee starts to kick in; the car is well-rested and working fine, as demonstrated by Amado and Mira's front-seat driving and navigational abilities in a fast and purposeful duet.  Ferrandini and Bishop jump in periodically to supercharge the engine and when it finally kicks in for good, what a ride!

“Into the Valley” is the real highlight of the disc.  It sounds like there are some very large animals and blood-drunk mosquitoes (courtesy of Bishop's trumpet-like dive-bombs) in that spacious valley.  Eventually the whole thing gets very intense with everyone riding a free groove that would probably sound like total chaos if you were dropped into the middle of it – but with the careful and gradual construction of the piece, it is positively hypnotic.  Absolutely stunning.

Amado, Bishop and Mira ease into “The Healing” with a series of long whole notes.  Enter Ferrandini and it becomes a (slightly) more lyrical piece of music, as the players each try to locate puzzle pieces to insert into the right spots – only to discover they've been chewed up by a litter of pups.  Instead of a completed, pretty picture you get art.  Hallelujah!

The Flame Alphabet is still available on vinyl.  Highly recommended.