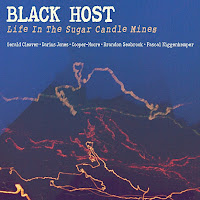 It's not everyday that a new recording grabs you instantly. Sometimes, if it does, it's just a fleeting thing, a little infatuation, that comes on quickly and strong, but then just as quickly is gone. My most recent infatuation began when I became enthralled with a promo video to drummer Gerald Cleaver's new improvising group Black Host. I watched and then waited for the attraction to subside, but it didn't. Rather, it grew as I watched the video again. Then, I put on the album and I knew that this was going to be long term thing.

Pulsating and fierce, the music claws it way out and grabs you, and that's just the drum and bass -- wait for saxophonist Darius Jones to play and you'll be further drawn in. Piercing through the thick rhythms, his playing is vibrant and guides the group over peaks and through valleys.

Lots of variety and texture on Life in the Sugar Candle Mine to keep the listener coming back for more. 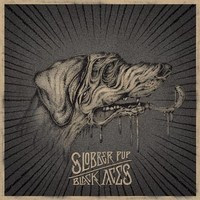 Slobber Pup has a dark turbulent nature. Aggressive, electric and unyielding, it starts off charging at you, a pounding feral beast of organ, guitar, bass and drums. However, beneath the snarl, there is something melodic and rhythmic. This is avant-garde metal jazz at its finest, expertly channeling its energy into the sonic unknown.

Slobber Pup has quite a pedigree too, being comprised of guitarist Joe Morris, organist Jamie Saft, bassist Trevor Dunn, and drummer Balazs Pandi. Of course Morris, Saft and Dunn are no strangers to readers of the blog and followers of avant-garde jazz. Pandi, however, may be a less familiar name. The Hungarian drummer has a growing career with hardcore and avant-garde projects, working with Merzbow and more recently Mats Gustafsson.

The opening track is the monumental half hour 'Accuser' that begins with Morris' unadorned guitar and is underscored by Saft's reedy organ. The energy builds pretty quickly, propelled by Pandi as Dunn and Saft erect a sonic wall to be reckoned with. When Saft really lets go, there is no place left to escape, the listener is trapped for the rest of tumultuous ride. 'Black Aces', track 3, is a bit more minimal in its set up, but soon is given a swift kick by Saft and Pandi.

Because of the concentrated intensity of the energy, I'd almost suggest experiencing Black Aces in controlled doses ... almost.