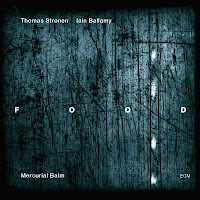 Having been a fan of "Food", the Anglo-Norwegian band since its first album, I was appreciative of "Quiet Inlet", their previous album on ECM, reduced to the core members of Iain Ballamy on saxes and Thomas Strønen on drums and electronics, with some guest musicians added.

For "Mercurial Balm", they keep the same concept, now with - on a number of tracks, guest musicians Christian Fennesz and Eivind Aarset on guitar, Nils Petter Molvaer on trumpet and Prakash Sontakke on vocals and slide guitar.

As you can expect, the music is calm "nu jazz" with long and stretched soundscapes over which the horns play their meditative melancholy melodies, music for dreaming away with eyes closed. And it's probably fine for a few listens, but even then most tracks have this high level of predictability and lack of dynamics or tension that are needed for repeated discovery.

Prakash Sontakke's vocals are more of the long moaning kind rather than the rhythmic carnatic singing, but beautiful though yet with a really limited presence on the album.

In all, one can wonder what this album adds to the Food catalogue, as they seem to have less to tell than before, even with the expanded line-up, or to use a bad metaphor : without substance, Food becomes a consommé.

Unfortunately, I can only support this review. Three years ago I saw Food feat. Fennesz and Molvaer on the Enjoy Jazz Festival, it was one of the highlights of that season. Fennesz and Molvaer filled Stronen’s and Bellamy’s structures with a certain psychedelic energy and so I was looking forward to this new album. It’s a pity that it is just a nice album which creates only something like an echo of the live atmosphere. Still, I think that they are a great band and very good musicians. Let’s see what they do on their next album.

Maybe it's just a problem of live over studio? I haven't heard the album (as yet), but I have some recent live recordings which are excellent - all without the guests.


I'll have to disagree with the negativity about this album. Yes, it's differentt to the previous (who wants a simple repeat anyway?) And I certainly can't agree with the unsensitive and dismissive comments about Sontakke's vocals.
To use Stef's original analogy I think the chefs have rearrannged their ingredients to present a different but equally tasty dish - a bowl of cool but spicy Gaspacho, anyone?

Hi Anonymous, I did not mean to appear unsensitive and dismssive about Sontakke's vocals. The word "beautiful" is positive in my opinion. His appearance is even all too short on the album.

Sorry Stef, I misread your review and misinterptreted your use of 'moaning' to be negative - apologies.
I still think the album's a worthy succesor to its predecessor though
Mark